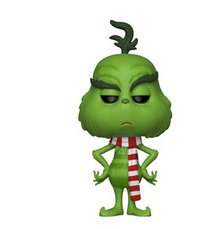 You’re a mean one, Pop! The Grinch. You’re also the latest installment in Funko’s Pop! Movies collection, which features nine new vinyl figures and several shared exclusives. The Grinch receives six new Pop!s, including a Young Grinch, Grinch (Scarf)(Walmart) and a Grinch clad only on his underwear (GameStop). The villain of Whoville also pairs up […]

Read More… from Pop! The Grinch Arrives To Ruin/Save Christmas