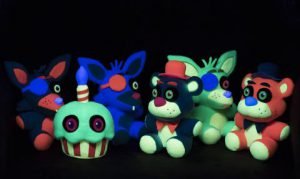 Funko hit the blacklight motif hard during Fundays this year, and it now continues into another new Five Nights and Freddy’s Plushies line. This January, keep an eye out for three different versions of Foxy, two versions of Freddy, and one of Cupcake. These are up for preorder by the case at . […]