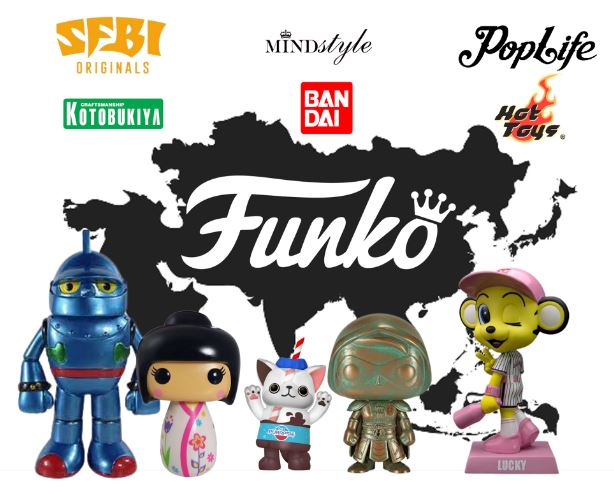 I have been collecting toys for more than three decades, and the Asian market has always offered interesting treasures of our favorite brands. Funko is not an exception, and it is important we understand the way how it operates there, to have a full view of the business that will help us as collectors.

Funko has divided its operations in Asia, into two markets, Japan and the rest of Asia.

About the Japanese market, Funko has always had business collaborations with other toy brands.

Finding its first partner in 2010, when the company from Everett, Wash., made a co-branding with Kotobukiya, releasing mascots from Japanese Baseball Teams as Wacky Wobblers and their versions from the lesser-known line Computer Sitters, being the very first Funko figures launched and distributed on the Asian continent. 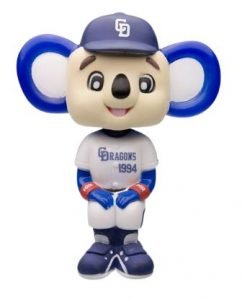 In 2014, Funko joined forces to distribute their vinyl figures with a new partner, the Chinese company, Hot Toys. The products were distributed and sold by its subsidiary company Hot Toys Japan, through its shops, Toy Sapiens, where many SDCC and NYCC grails from 2014 to 2016 were sold for retail price. It’s hard to believe, but it is true.

Besides, we found variants from U.S. retailers with the Toy Sapiens sticker. In my humble opinion, the most “Amazing” Pop! figure of this list is the Chase version of Spider-Man #15 (Glow in the Dark).

From the last quarter of 2020 the new and exclusive distributor of Funko in Japan is the giant toy company, Bandai. I guess in the short term we would see some interesting news from the land of the rising sun. Let’s wait.

The Rest of Asia

And now, it is time to figure out the rest of the Asian market, which leaves us with too many interesting facts and curiosities. First, to help in this review, MINDstyle and PopLife Global are all one and the same company, even when they use different licensing brands, including their sister brand SFBI.

An important player in the partnership among Funko and MINDstyle/PopLife Global, is a well-known New Yorker shop and toy distributor, Toy Tokyo. The toy business from New York has been distributing their products and hosting these vinyl toy brands at New York Toy Fair for years.

In parallel to San Diego Comic Con 2014, explicitly on July 24, Pop! Asia was officially launched in an exclusive event under the auspices of Funko, MINDstyle and Toy Tokyo, leaving with us among the surprises of that day the hard-to-find Gold Hula Girl Pop! as a part of the limited editions released at SDCC that year.

MINDstyle has a strategic creative and manufacturing partnership agreement with Funko, and initially Pop! Asia was distributed in the Philippines and Thailand. But not only the new line of Pop! figures came to light, the first Sofubi (soft vinyl toy) Funko line was born too as part of this collaboration, Hikari.

To promote them, several exhibitions took place on both sides of the World, showing very rare and unique prototypes of those series, highlighting 1st Funko Pop! Roadshow Philippines (2014), and Creatures of Light (2014 Manila – Philippines). Later it was in Bangkok at Thailand Toy Expo (2015) as well, billed as “Where Art Meets Play,” and had other tour stops such as Funko x MINDstyle — Pop! Life World Tour San Diego (SDCC 2015), the event was sponsored in SDCC by Toy Tokyo and BAIT. 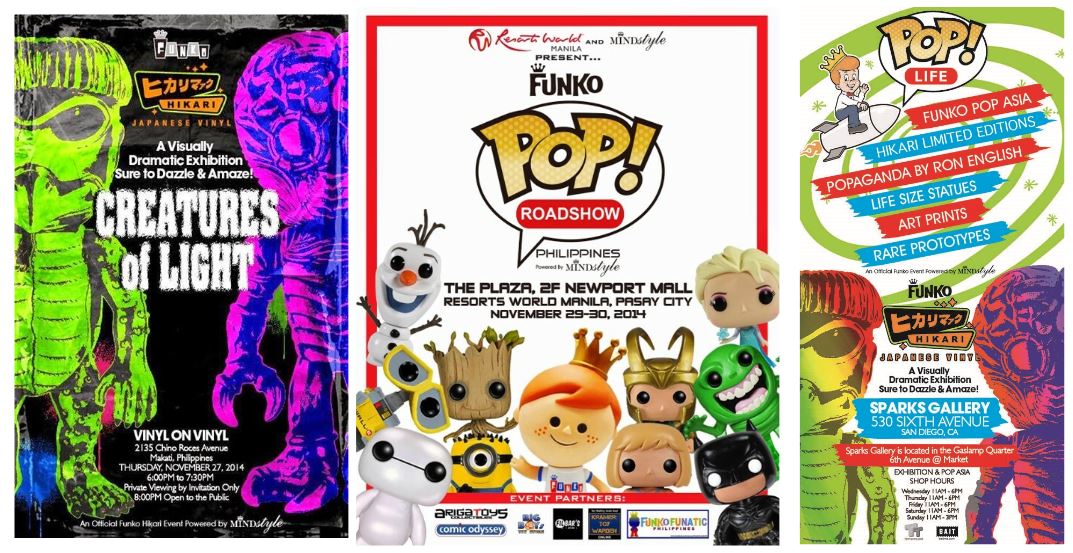 On the other hand, Toy Tokyo promoted both series in the United States in several conventions.

The start of the race was in New York Comic Con 2014 where the audience had the opportunity to get several prototypes of the new lines.

Besides, 38 ultra-rare and limited in pieces Hikari figures were given away to the Lucky Kitty Red Envelopes winners at Toy Tokyo x Funko Hikari Super Exclusive Halloween Party (NYCC 2014), giving the opportunity to get another jewel on that event and limited to one piece, Freddy Funko as Creature of the Black Lagoon, better known as Freddy Halloween Creature. 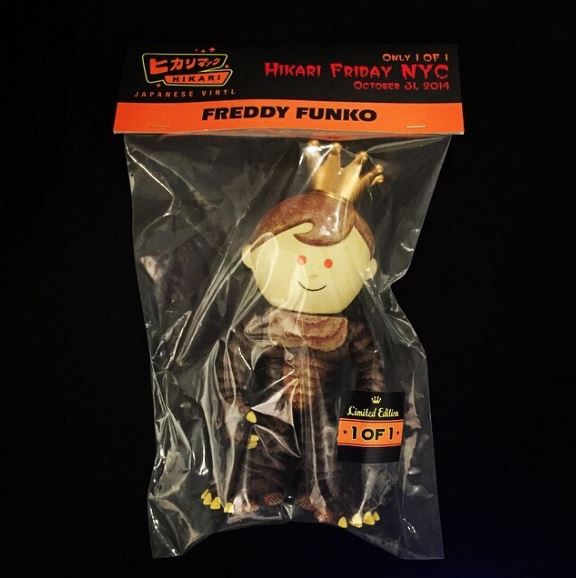 Next year, at New York Toy Fair 2015, MINDstyle exhibited at Toy Tokyo booth some of the rarest Freddy Funko prototypes ever shown, outfitted like Asian characters, and where a few lucky people saw another white whale, the Pope Francis Pop! vinyl figure. Where are those prototypes?

Pop! Asia presents us with different kinds of characters and celebrities, such as the former boxing world champion Manny Pacquiao or different monsters from the Asian mythology. Another curious thing is that we can discover references to Japanese culture too, particularly characters created by the “Godfather of Manga,” Osamu Tezuka.

Collaborations like the one made with the greatest and famous Japanese tattoo master, Mutsou, bringing to life Pop! Asia Fudo Myo-o #77 on its four variants or the Omamori Dolls based on the traditional Kokeshi Japanese dolls. The funny thing is that those figures were never released in Japan. 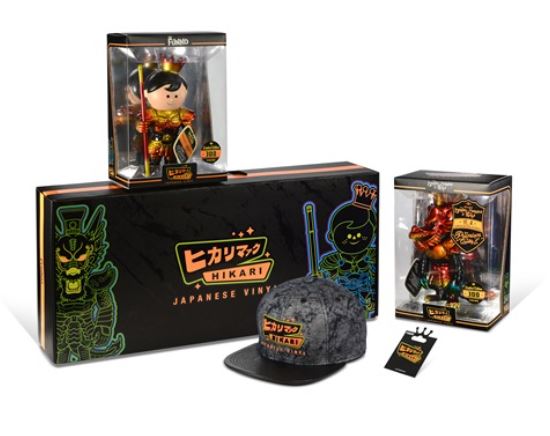 Over those years (2015-2019), incredible Pop! Asia exclusives were launched in conventions, highlighting Bangkok Comic Con, ToyCon Philippines, Thailand Toy Expo and Animation-Comic-Game Hong Kong, being remarkable Stan Lee as Guan-Yu, characters from Street Fighter franchise and bearing in mind some variants of the mythical and legendary Asian folklore like Tossakan, Siyokoy, Hanuman, and Giant Lady among others.

Not too many people know, that in 2016 the first wave of Pop!s were distributed in China, releasing characters of the Chinese blockbusters Surprise! (2015) and Sweet Sixteen (2016), socking us with the Sweet Sixteen Pop! Asia Exclusive Box with the chance to get Xia Mu (Gold) #112 Chase version, a very rare beauty for treasure hunters in the wild. 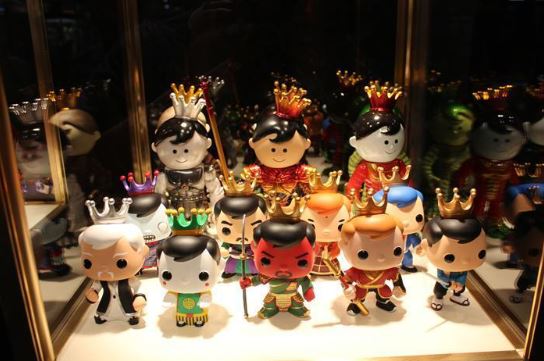 Following with the Chinese market, Funko x MINDstyle pulled out all the stops since 2021, with events such as Funko 2021 Shanghai Event, QTX QQ Tencent 2021, ChinaJoy Con 2021, and Funko Fun City Exhibition in Beijing (Dec 2021 – Feb 2022), with new releases of characters from The Three Kingdoms, Water Margin, and Beijing Opera, and not forgetting the new version of Freddy Funko as Monkey King, Freddy Funko Kung-Fu, and Freddy Funko as Guan Yu.

During the last two years we have seen other launches in the Chinese market, focusing on characters from its millennial culture, literature, and folklore. Some of those were released at San Diego Comic Con 2022 (MINDstyle’s Booth).

A very interesting fact is that at Funko 2021 Shanghai Event (April 2021), four months before FunKon 2021, some of the Freddy Funko exclusives of Funko Box of Fun 2021 were exhibited at Joy City Mall, and the stickers were completely different – even the ones with the Funkon sticker don’t show the number of pieces on it, just the words Limited Edition.

The most fantastic thing is that some of those Freddy have the non-existent SDCC 2021 sticker. Being honest, I don’t know if those pieces are unreleased figures, A/P, prototypes or were given away, and I wonder, how many of them were previously exhibited in Shanghai?

Funko x MINDstyle/PopLife Global bring us some figures from the Eastern to Western market in a round licensing business trip. In 2019, PopLife in collaboration with the Beijing Imperial Court Cultural Development Company and in association with DC Comics (Warner Bros), created a line of collectibles based on the archives of the museum collections from the Imperial Palace in China. The series was called DC Imperial Palace, finding DC heroes and villains characterized by ancient Chinese warriors’ armor. 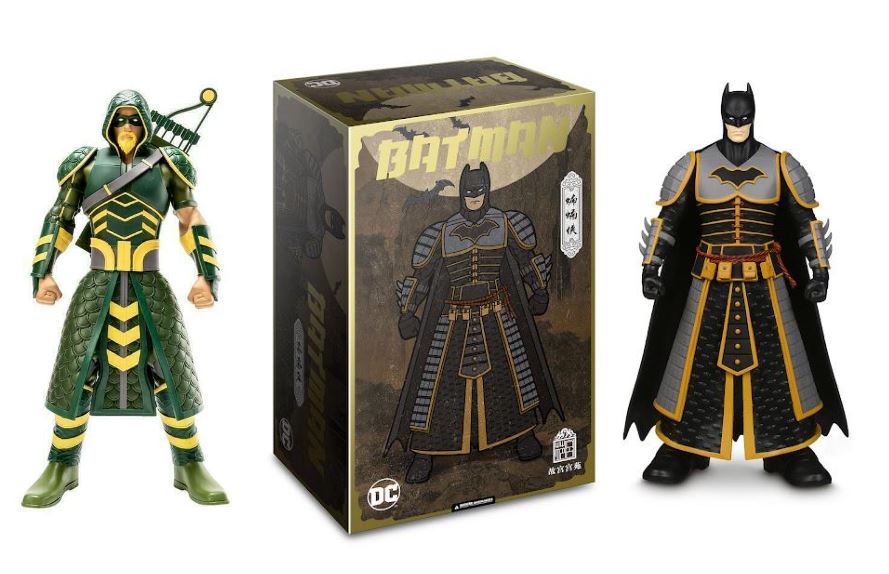 PopLife Global launched at MINDstYle booth (SDCC 2019) the first wave of 15 inch figures of this series. We had to wait until 2021, when the very first Funko Imperial Palace figures came to our shelves in a wonderful red box.

The new waves are presented in white boxes, and during this year the first models of Blacklight Pop!s have been added to the Imperial Place list.

However, the most limited figures have been released in China, spotlighting the metallic versions of them. I guess that we will see in the short term, the Green Arrow Pop! figure too, the only one that Funko have not produced yet. In the meantime, we will wait for the upcoming new Blacklight figures.

As we have seen with the Imperial Palace, the Asian market offers us more exclusive figures from other Pop! lines, having AD Icons, such as Jollibee and friends (Philippines) and Ronald McDonald (Thailand), icons like The Merlion, the official mascot of Singapore, Animation with the Japanese anime phenomenon from the 70’s, Voltes V, Comics with the paranormal detective Alexandra Trese, and Darna, the heroine created by the Filipino graphic novelist Mars Ravelo.

Let’s not forget another Asian exclusive which made its debut in Valiant Entertainment booth (NYCC 2016), the pre-released of Faith Herbert aka Zephyr.

Surprisingly the member of the Harbinger Renegades was not released as Pop! Comics, just as POP! Valiant #1, being the only figure of this line. It was a pity that the other figures of that series were canceled.

Even Pop! Rocks started this year with the Filipino singer Jose Mari Chan.

So, it is not strange seeing some characters from Pop! Disney in this long list too. Finding in 2014 the charming variants of Prince John #98 and Olaf #79. In 2020, Mickey Mouse (Go Thailand) #787 was featured in Thailand’s national outfit and in the iconic “Wai” pose.

At the beginning of the present year, the Philippines Department of Tourism teamed up with Funko, and they announced five variant stickers of Mickey Mouse (Go Philippines) #1139, wearing the traditional barong tagalog, to promote the major tourist magnets of that country, Boracay, Baguio, Cebu, Manila, and Siargao Island. 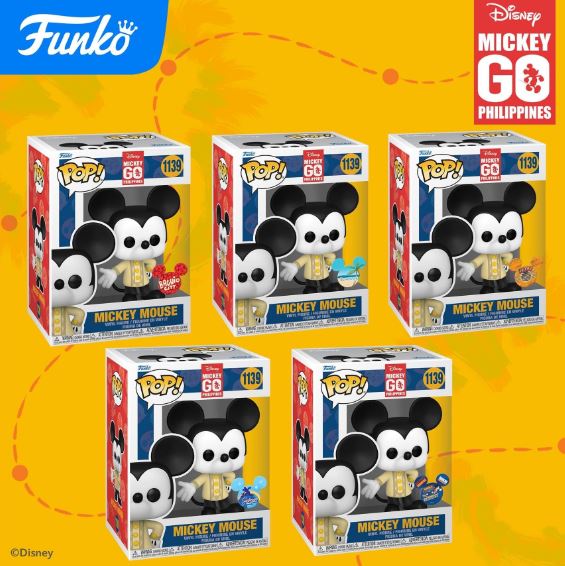 The sepia version of this Pinoy Mickey was launched as Big Boys Toy Store exclusive and was limited to 5,000 pieces. Those figures also contain a postcard inside the boxes. 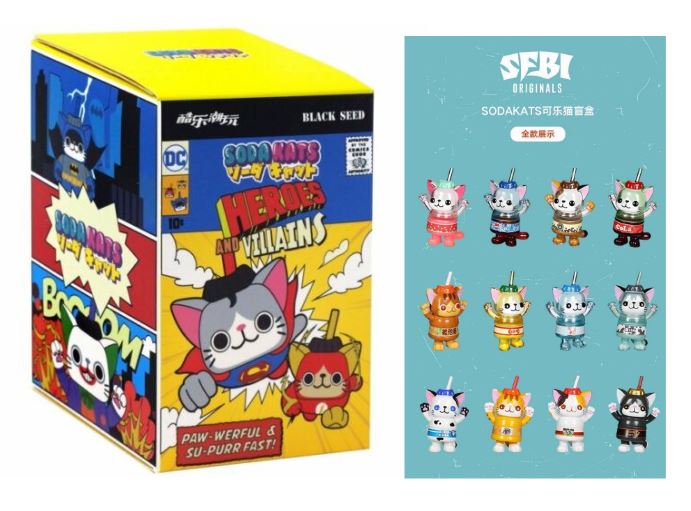 And more recently the magnificent Ron English’s Mona Lisa Grin (Funko Shop Exclusive) was included at Ron English x MINDstyle and Funko PopUp (Shanghai 2021) as one of the greatest artistic collaborations of this partnership ever made. 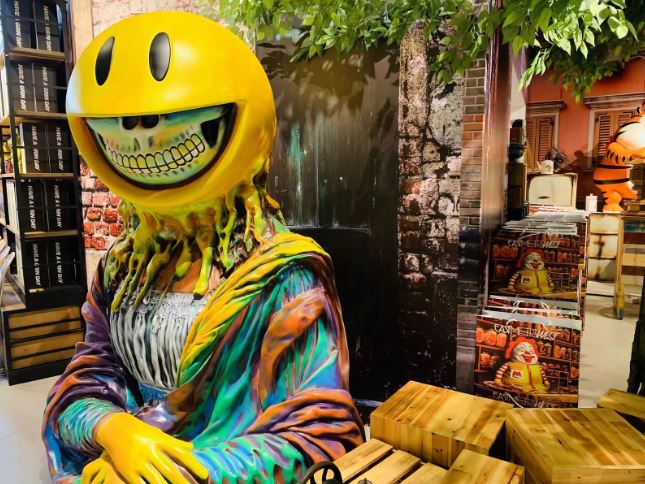 Furthermore, events like Funko Funatic Philippine Christmas Party leaves us some relevant limited editions from other Funko lines, including the Huckleberry Hound (Gold) Pop! Pez, which is limited to 500 pieces.

As we could see a few days ago at the 2022 edition of this event, and going back to Pop! series, we were surprised again with another must-have figures, the new and exclusive limited editions of Freddy Funko in Philippine Barong and Jose Mari Chan Gold Suit version, both limited to 1,000 pieces.

Just my opinion, but I consider the Christmas party organized by Funko Funatic Philippines, one of the most important Funko events worldwide. I don’t know when, but I would like to go there someday.

The Asian market has a key role in the world of Funko, and it is not a secret we will see more exclusives from there waiting to be a part of our collections. So, next time when you find a limited edition from Asia in your next hunt, don’t think twice, get it if you don’t have it, because you won’t regret it. I know that from my own experience.

I hope you find this information helpful. Have an excellent week. Let me know if you’d like to know more in the comments below and have the best Christmas ever.

One thought on “From Japan and Beyond, Funko’s History of Asian Pop! and Other Collectible Figures”