It is not difficult to think of robots when we talk about Science Fiction.

Since the early days of the Seventh Art and Television, they have played a relevant role in different cinematographic productions. Generation after generation, the work of several film directors has been influenced by these robotic characters, with some of them becoming true icons of pop culture.

Nowadays, robots have never been more stunning, deep, or real on the big screen. However, it wasn’t always the same. There was a time when, thanks to the make-up effects and costume designs, they were created to reach the audience, making it possible for the language of sensational cinema to evolve, being a valuable part of our visual history.

Funko has been released some of these classic and legendary robots from the Wacky Wobblers days, bringing them to our collections in different shapes and scales. So, let’s review some of these amazing vinyl figures. 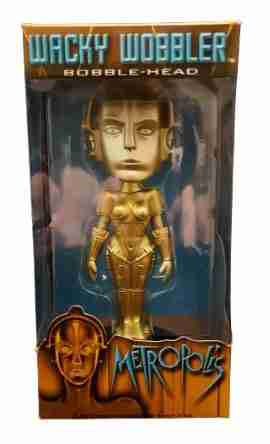 We start this chronological journey with Metropolis (1927), a German expressionist science-fiction film, directed by the great Fritz Lang. This futuristic masterpiece is considered one of the greatest and most influential films in the history of cinema, and it is one of the few movies which is part of the UNESCO’s Memory of the World Programme. Funko presents us the Maschinenmensch (Machine-Person), also known as False Maria or Maria, as Wacky Wobbler in its common and chase gold version. Both were released in 2010.

Following 2010, Funko astonished us again with the bobble head figures of Gort, common and chase, from The Day the Earth Stood Still (1951), an American science fiction film directed by Robert Wise and starring Lock Martin, who was selected for the role because of his tall height (2.31 Meters). This alien robot is based on the character Gnut from the 1940 science-fiction short story “Farewell to the Master” by Harry Bates. The vinyl variants of the police force robot are amazing, and are some of the few figures in the catalog with eyes that light up when the head bobbles. 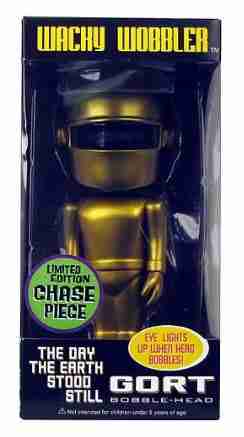 We also find another 1950s sci-fi blockbuster, with one of the most iconic robots ever known, Robby the Robot from the film Forbidden Planet (1956). This classic film pioneered several aspects of science fiction cinema, being the first movie that showed an interstellar traveling. The inhabitant from planet Altair IV made several subsequent appearances in science fiction movies like The Invisible Boy (1957) and television shows. It was released as Wacky Wobbler in 2010.

Besides the standard versions, that includes a chase, we also find three out of this world metallic chrome variants from SDCC 2010, all of them limited to 480 pieces. In 2014 was the turn of three Pop! vinyl versions, highlighting Robby the Robot #89 (Chase – Purple Metallic), Gemini Collectibles Exclusive, being one of the most exclusive chase Pop! ever made, only 48 pieces. The list of Morbius´ mechanical servant in Funko’s catalog is completed with the Mystery Mini (2014) and the Pint Size (2017) collectibles. 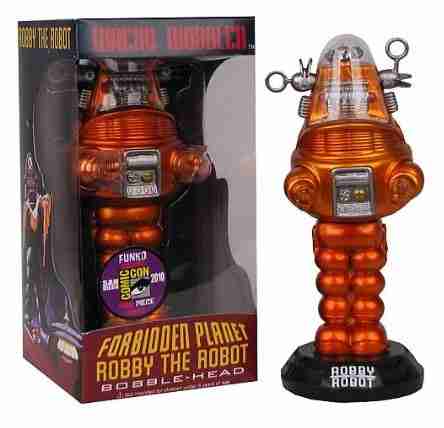 From 1965 to 1968, Lost in the Space was one the most popular science fiction TV shows, which has become a cult series over the years. The show was an adaptation of the novel The Swiss Family Robinson (1812) written by Johann David Wyss. The series follows the adventures of the Robinsons, a family of space explorers who struggle to survive at the outer reaches of the galaxy with the help of The Robot, a B-9 model. An interesting and curious fact is that The Robot was designed by Robert Kinoshita, who also designed Robby the Robot and Tobor. 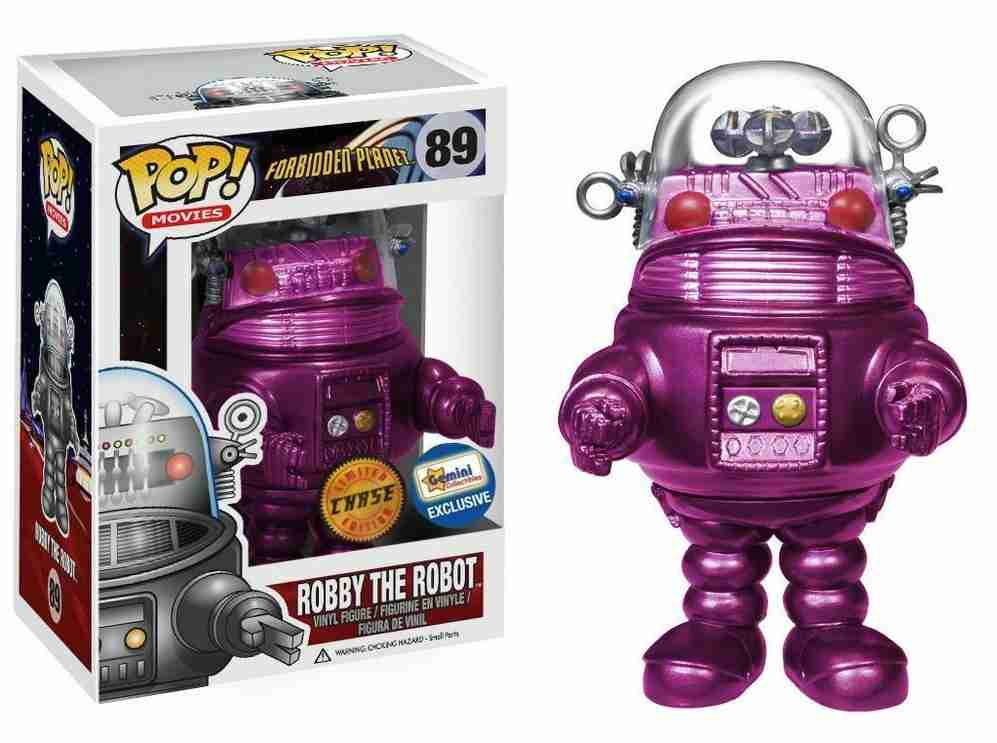 Funko launched the robotic squire of the Robinson family in 2012, and surprised us by making it a talking bobble head with three quotes: “Danger, Danger, Will Robinson!,” “Warning, Warning!” and “That Does Not Compute!” Besides, at SDCC 2012, two more variants followed the common one. The gold version, limited to 480 pieces, was available during the event, and the blue metallic version was given away during the Fundays. Later, it was limited to 12 pieces, and all of them are numbered and signed by Brian Mariotti. We also found that same year, the magenta bobble head variant as Gemini Collectibles Exclusive, limited to 240 pieces. In 2014, The Pop! came to life as Pop! Television #92. 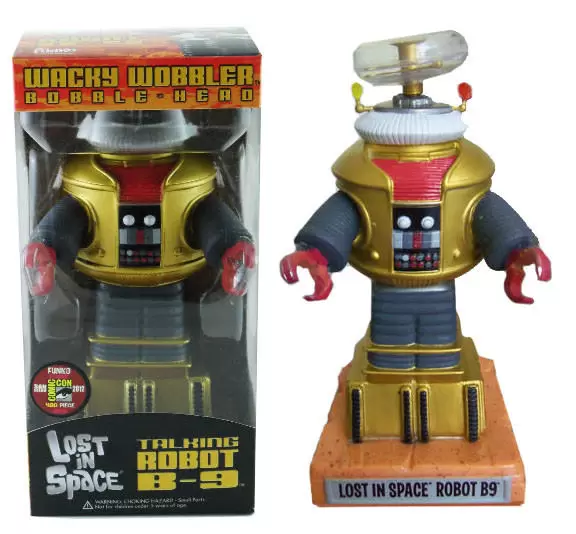 In the wake of several successful disaster films during the 70’s, we found an interesting movie which mixed that film genre with science fiction, The Black Hole (1979). The intrepid crew of spacecraft USS Palomino with the invaluable assistance of the intrepid robot V.I.N.CENT. (Vital Information Necessary CENTralized) must survive the madness of Dr. Hans Reinhardt and his “robot” army, which includes his devoted and killer bodyguard robot, Maximilian.
The figures of this Disney film were released at NYCC 2017 as a part of Pop! Movies series, VINCENT #314, and Maximilian #315. Both are Toy Tokyo Exclusives. 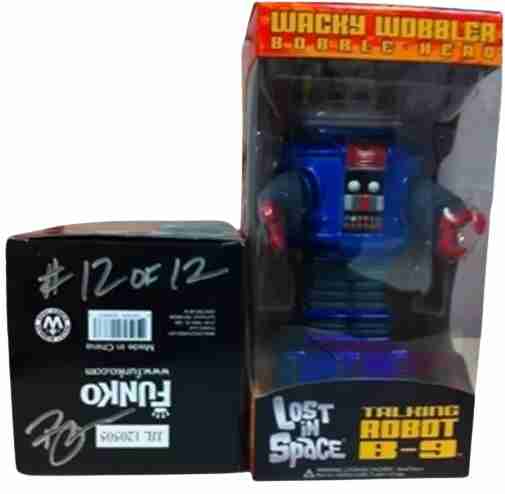 These classic icons will always have a special spot in our collections because they are part of the living history of pop culture. It will be amazing seeing more of them in the short time, particularly as Soda figures, just a thought…, but who knows? 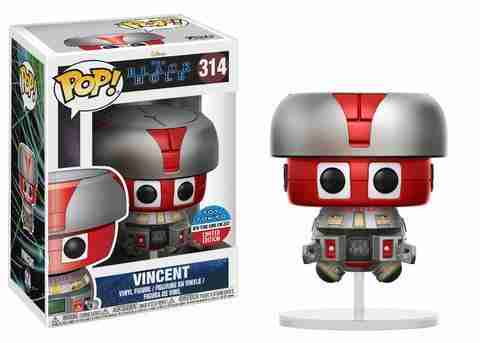 Unless, we have work to do, finding some of the white whales in this review, and it won’t be easy, maybe we will need the help of a friendly robot.