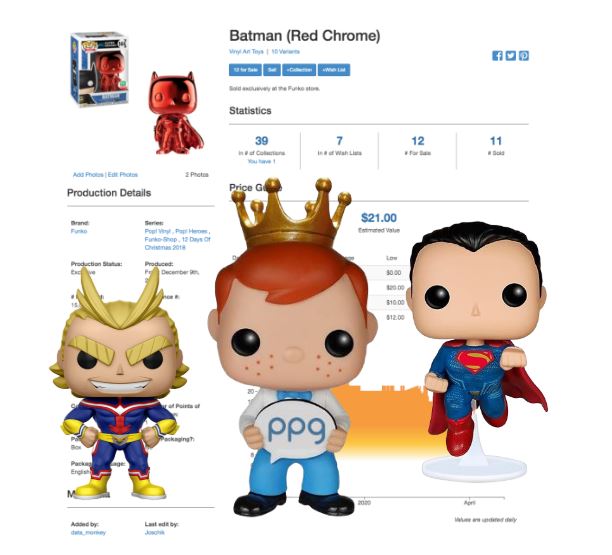 Late last year, we opened our doors to the collecting community, presenting you, our loyal PPG’ers, the opportunity to own a piece of Pop Price Guide and the hobbyDB family of brands.

Without your support, we wouldn’t have been able to achieve such tremendous progress in the last few years, especially in regards to our price guide (that is now officially used by Funko, but you probably already knew that!). And we’re just getting started.

We’ve come a long way since beginning our crowdfunding campaign, generating more than $200,000 from over 400 new collectors-turned-owners. The beauty of crowdfunding (and why we decided to go this route) is that it gives all of our members a chance to own a piece of what they are helping to build. This way, if we do well, so do YOU.

But the opportunity to become part of the PPG team is drawing to a close. There are just 24 hours remaining on our crowdfunding campaign, which officially closes at 9 p.m. pdt on April 17.

Your investment will help us supercharge the collecting experience with new tools to better manage your collection. Some of those features, such as price charts and detailed varianting, can already be found on hobbyDB, the engine that powers Pop Price Guide.

Two weeks ago, we also announced our new price valuation, which now gets investors and potential investors close to twice the amount of shares as before.

It’s always been our belief that, together, we can change the future of collecting. Here’s your opportunity to become part of the movement, but you must act quickly.

Find more information on how you can own a piece of Pop Price Guide and hobbyDB here.

Here is what some of our newest investors are saying about the chance to own a piece of Pop Price Guide:

“I’ve been using Pop Price Guide since I began seriously collecting around 2014. I’ve developed a passion for it and am really excited to be involved in the start up of the original online Funko enthusiasts!” – Lindsey Clemons

“Love the platform. I have about 250 items sold and sales over $14,000 in a short time period. It’s the best platform out there and I believe it will dominate the industry.” – Scott Madole

“I invested because I not only believe in the future of this entire movement, but for at least two years have used PPG and seen it become a literal standard in the industry and merged with the Funko app. So to think that further growth would not happen would be the thought of a fool. I believe in this company and all of the people who are in charge of its growth. I wish only the best for this company, not because I’ve invested my own personal money, but because as a collector this is what we need and because I have yet to see anything hit growth and forward movement from this company.” – Kenneth Lopez

“I invested because PPG has been a vibrant tool for keeping track of our massive funko collection. PPG makes it easy to catalog and keep track of our collection. Look forward to being part of the company and watching it grow. I appreciate the opportunity.” – George Kennedy

Join us in revolutionizing the collecting experience and creating THE home for collectors worldwide.