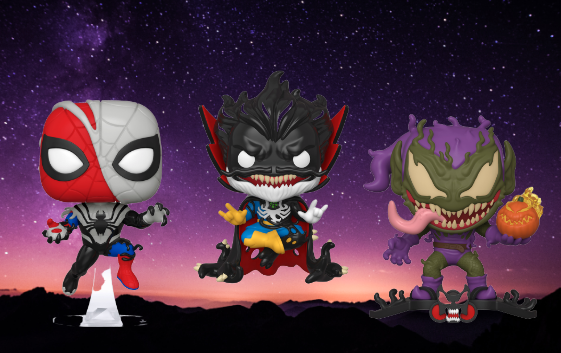 You haven’t been truly welcomed into Funko’s world of Pop! Marvel until you’ve been taken over by the Pop! Venom symbiote.

Funko introduces nine more Pop! Vinyl figures that receive the venomized treatment, including Groot, who has now been victimized twice – three times if you also include his new 10-Inch Venomized version.

Also falling under Venom’s spell is Captain Marvel, Doctor Strange and Punisher, as well as Ultron and Miles Morales. Venomized Green Goblin can be found at Hot Topic, while Spider-Man is a Walmart exclusive. Wait…Spider-Man hasn’t been Pop! Venomized, yet?

The new collection also comes with a series of venomized Keychains, Pen Toppers and a series of Mystery Minis.

Pop! Venom series arrives in stores in March. But you can stay safely indoors and pre-orders yours today.