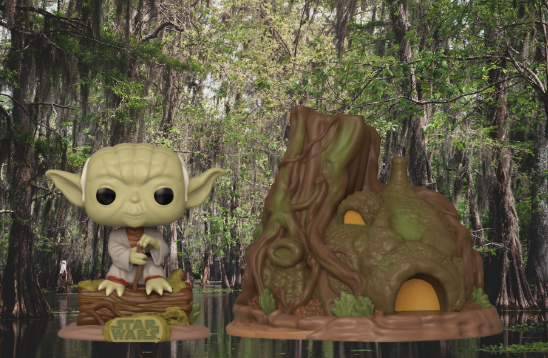 Funko brings a galaxy far, far away a bit closer with the introduction of its 40th Anniversary Collection, dedicated to the fabled “Star Wars: Episode V – The Empire Strikes Back.”

We met a lot of our favorite characters for the first time in “Empire Strikes Back,” including Yoda. The little green Jedi Master and his Hut mark Star Wars’ first foray into Funko’s Pop! Town collection. Look for the new set in stores this February.

There’s even more to celebrate, however, as Funko also unveiled five new Pop! Star Wars vinyl figures among this week’s London Toy Fair 2020 Reveals. Those now on the radar of the Empire and collectors are a pair of Luke Skywalkers, including one of Luke Riding a Tauntaun and another Training on Dagobah with Yoda.

Han Solo and Princess Leia say their goodbyes in a Bespin 2-pack, right before the bounty hunter is Frozen in Carbonite.

And what Pop! Star Wars collection would be complete with Darth Vader? Luke’s dad relaxes in his Meditation Chamber in one of the more elaborate Pop! Star Wars figures ever created.

May the Pop! Force be with you.