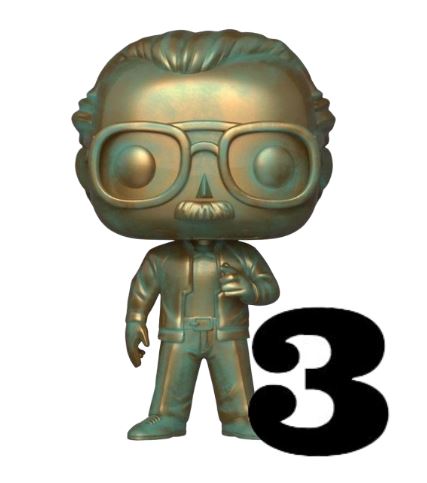 To determine the year’s hottest Pop!s, we deployed an intricate algorithm that was brought back to us via a DeLorean and kept away from the greedy hands of violent Libyan mall terrorists.

Turns out, the code is simple. We tallied the amount of times an item appears in both users’ collections (OWN) and their wish lists (WANT) within the PPG database. The results are a swath of our favorite Pop!s from Marvel and Star Wars to Disney and more, including our No. 3 Pop! of the year, according to you, the fans and collectors…

Stan Lee comes in many different colors and outfits, but none won over the hearts of Pop! Marvel fans in 2019 more than Stan Lee (Patina). The father of Marvel Comics is owned by more than 7,400 fans and wanted by close to 500 more, making him the most popular Pop! Marvel vinyl of the year. Lee also appeared in 2019 as an Astronaut version of his character from “Guardians of the Galaxy Vol. 2,” which doubled as a New York Comic Con and Walmart shared exclusive and can be found in the collections of more than 2,700 PPG users.

Visit again tomorrow when we reveal the penultimate Pop of the Year. Here’s a hint, we warned you earlier in the countdown that you’d see more from this franchise. Can you guess? Tell us in the comments below.