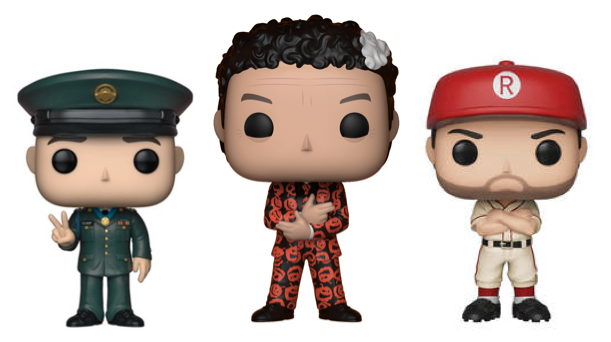 This post has been updated with new Pop! Cast Away and Pop! Big figures. See below for…Wilson and Zoltar!!

Happy birthday to Pop! Tom Hanks, a man with nearly as many Pop! figures as film credits.

Funko celebrates Hanks’ 62 birthday this week with the gift of two new vinyl figures dedicated to one of America’s most iconic actors.

Funko adds a pair of new figures to its Pop! Forrest Gump collection, including the introduction of a uniform-clad Gump donning his War Medals. Naturally, he’s flashing a peace sign.

The set also receives a Target exclusive that depicts Gump in his Blue USA Ping Pong uniform. That combo comes replete with a Funko-themed paddle.

The blue Gump is a variant of the red United States uniform Gump (Ping Pong) released earlier this year. That Pop! debuted alongside Forrest with a Box of Chocolates.

A running version of Gump (Beard) is set for release during the 2019 San Diego Comic-Con.

The Pop!s don’t stop there for Hanks. In fact, there are nine versions of Sheriff Woody, alone. Of course, some of those get a little specialize Funko treatment, such as Conan O’Brien masquerading as Sheriff Woody and a San Francisco Giants rendition of the “Toy Story” protagonist.

Where Woody is filled with a childlike affability, Jimmy Dugan might be the polar opposite. Both, however, make for great Pop! vinyl characters. Dugan, the grizzled, foul-mouthed coach from the 1991 film “A League of Their Own” received a Pop! of his own earlier this month. Hanks’ stardom isn’t reserved for the silver screen. His portrayal of David S. Pumpkins from “Saturday Night Live” earned Hanks another Pop! figure.

Funko crash lands with a new announcement…Wilson!! The new set of Pop! Cast Away brings us a pair of Tom Hanks (and one volleyball) vinyl figures from the 2000 survival drama. Chuck and Wilson are available in September, but can be pre-ordered today. Look for Chuck with Crab Spear around the same time as a Target exclusive.

Birthday week continues for Tom Hanks, who makes a wish and becomes…three new Pop! vinyl figures from the 1988 comedy “Big.” The new set features Josh in an Over-sized Suit, as well as on the iconic Giant Piano. A resplendent Josh decked out in a Tuxedo will be available as a Target exclusive when the Pop! Big collection goes on sale in October, but you can pre-order yours today. And while he’s not Tom Hanks, it’s difficult to ignore the greatness of Pop! Zoltar.