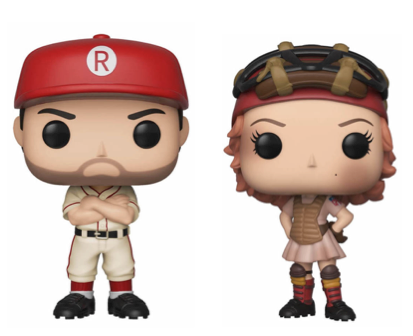 There’s no crying in baseball, nor is there weeping when its comes to collecting Funko’s newest Pop! A League of Their Own collection.

Unless you count tears of joy.

Tom Hanks and Geena Davis take on the likeness of Jimmy Duggan and Dottie Hinson, respectively, from the hit 1992 motion picture.

Hanks is no stranger to the world of Pop! vinyl figures. Funko has immortalized him in Sheriff Woody, Forrest Gump and David S. Pumpkins from Saturday Night Live fame.

It’s the first Pop! figure for Davis, who — at risk of editorializing — really deserves a Pop! for several of her previous roles, including Thelma (Thelma & Louis). And don’t get us started on the lack of a stretchy, horror-faced Davis as Barbara Maitland from “Beetlejuice.” Until that day, we’ll have to, instead, admire her Barbara Mystery Mini.

The Rockford Peaches’ tandem won’t go on sale until September, but you can preorder yours today.

3 thoughts on “Funko Steps To Plate With Pop! A League of Their Own”