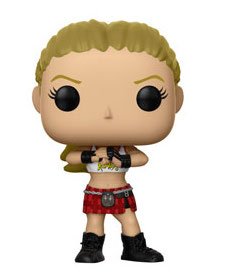 Funko lifts a turnbuckle and climbs into the ring with the addition of Pop! Ronda Rousey among its mighty lineup card of WWE superstars.

It’s the second Pop! figure for the fearless Rousey, who previously took on Pop! UFC form from her days in the octagon. Now, the current Raw Women’s Champion trades barbs and elbows with Pop! WWE greats such as Rowdy Roddy Piper, The Ultimate Warrior and Andre The Giant, to name a few iconic wrestlers turned Pop! vinyl character.

Pop! WWE: Ronda Rousey doesn’t lace ‘em up until later this month. But you can preorder yours by clicking the links below.