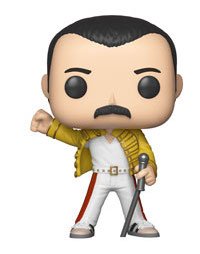 We will…we will… Pop! Queen You.

Everybody, we will…we wi…you get the point.

Funko fires up the crowd with the latest addition to its Pop! Rocks collection with six new vinyl figures commemorating Freddie Mercury and the legendary British rock band Queen.

Relive Mercury from the fabled 1986 Wembley Stadium show or delve deeper into the archives for the Hot Space Tour version available exclusively via FYE.

John Deacon, Brian May and Roger Taylor join the ebullient Mercury on stage for their Funko debuts.

Pop! Rocks: Queen goes on tour in December, but don’t worry. You’re not under pressure. Simply preorder yours today.

Did they listen? It’s worth mentioning that Freddie Mercury, along with David Bowie, topped our July PPG Poll in which we asked which artist(s) you’d most like to see Funko immortalize in Pop! Rocks form. Rock on.