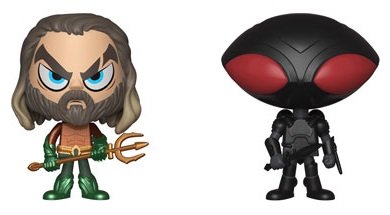 Control of Atlantis is on the line once again when Funko unveils its latest Vynl. Aquaman 2-Pack.

Arthur Curry and his alter ego battle Black Manta in the latest installment to the company’s DC Comics line. The archenemies are inspired by the upcoming “Aquaman” film, which makes its theatrical debut on Dec. 14.

The duo joins previous Vynl. DC Comics tandems, such as Batman and Wonder Woman, The Joker and Harley Quinn, and Darkseid and Martian Manhunter.

Vynl.: Aquaman – Aquaman and Black Manta will arrive on shelves in December. But you can preorder yours today.