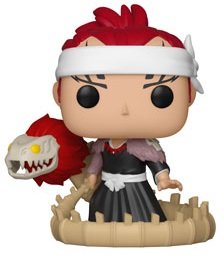 First Renji Abarai became an ally of Ichigo Kurosaki. Then he became the latest member of Funko’s Pop! Bleach collection.

Renji and Grimmjow make their Pop! Animation debuts as part of a three-figure set. Zabimaru joins Renji (Bankai Sword) as a GameStop exclusive.

The tandem is part of a Pop! Bleach assemblage that includes the previously released Ichigo (Hollow) and Rukia.

The Pop! Animation: Bleach collection arrives in stores in December, but you can preorder them today.