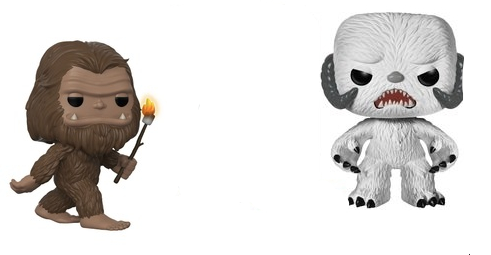 Grab your camera. We’re heading into the forest in search of the elusive Big Foot per our latest PPG Poll dedicated to the recent release of the animated film “Small Foot — and its subsequent Pop! vinyl figures.

Turns out, Funko’s Big Foot with Marshmallow is the most popular Sasquatch, Yeti or other mysterious primal ape produced in Pop! form. But it was close call as Marshmallow Big Foot edged the Wampa by just eight votes (138-130).

Between those two and Disney’s Abominable Snowman and Snowy Big Foot the top four vote-getters accounted for 490 of the poll’s 759 votes.

If there’s one thing we learned from this poll…it’s the Funko needs to make a collection of Harry and the Henderson Pop! Movie figures.

Thank you to everyone who took time to cast a vote. Please make sure to vote in our new PPG Poll, in which we debate our favorite Venomized Pop! Marvel vinyl figures.