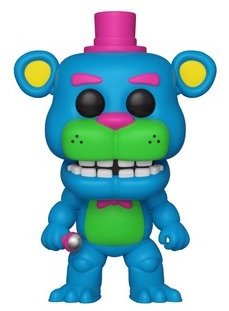 The company makes an already trippy Five Nights at Freddy’s franchise even trippier with lines of Mystery Minis and action figures, as well as pens and plush key chains.

But the highlights of the release are five new Pop! Games vinyl figures dedicated to the popular horror-themed video game franchise. All of Freddy’s pals get the Blacklight treatment, with Bonnie joining the likes of Chica, Cupcake and Foxy.