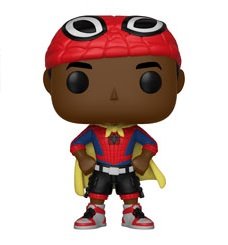 Funko casts us into the Spider-Verse with its new Pop! Animated Spider-Man collection.

Spidey’s latest endeavor with the company brings us a series of new Mystery Minis and keychains, as well as nine Pop! Marvel vinyl figures dedicated to the forthcoming animated film “Spider-Man: Into the Spider-Verse,” which is set to debut in theaters this December.

Miles Morales teams up with Peter Parker and Spider-Gwen to fight the likes of Green Goblin and Prowler in a universe where multiple Spider-Men exist.

Spider-Man Noir also comes stylized with a hatless variant that can be found along with Spider-Ham as a Walgreen’s exclusives.