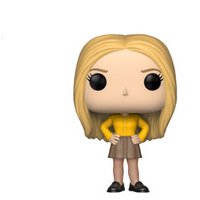 Poor Jan. She was even left out of Funko’s new Pop! Brady Bunch collection.

Plenty of other Brady family members, however, make their Pop! Television debut in the new set of vinyl figures dedicated to the iconic program.

Marcia Brady, naturally, leads the six-figure series that includes Bobby (with football), Greg (with guitar) and Peter, as well as Cindy.

The Pop! Television: The Brady Bunch won’t hit the stores until later this month, but you can preorder yours today.

5 thoughts on “Here’s A Story About Pop! Brady Brunch”