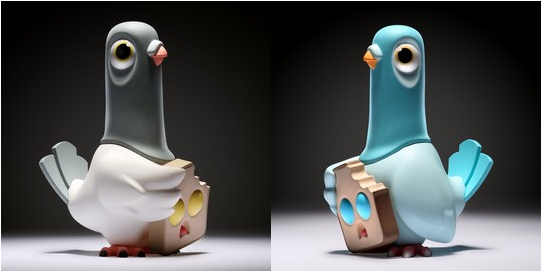 What happens when you’ve collected every single Pop!, Mystery Mini and Wacky Wobbler ever created by Funko?

Perhaps you look outside of the Seattle-based company to help fill out what already sounds like an impressive collection.

Here are three options for expanding your collection beyond Funko.

Coarse takes us on a journey between a lonely city pigeon and a forgotten slice of bread with its 2018 Thailand Toy Expo versions of Ruffle and Toast.

The series is part of Coarse’s Friends Feast Series dedicated to the short-lived and tragic friendship between Ruffle and Toast.

The “Ruffle and Toast – You’re So Tasty” figures stand four inches tall and were limited to a run of 600 pieces. It retails for $25.99 and can be purchased by clicking here.

The piece is complimented by a more rare version of the unlikely friends dubbed “Ruffle and Toast – Mmmh, Carbs.” Coarse limited that figure to just 250 items. The seven-inch tall figure lists at $119.99. Find yours here.

We’ll have more news surrounding these guys around the New York Comic-Con in early October.

Sideshow Collectibles stepped into the spotlight in 1994, quickly earning the reputation as a modern day renaissance studio.

Leonardo da Vinci himself would be impressed, no doubt, by the intricate detail painstakingly worked into every piece by Sideshow’s artists.

Particularly its newest life-sized K-2SO figure. At 94-inches tall, K-2SO is an imposing force for the collection of any diehard Star Wars fan’s collection. It’s so big, Sideshow suggests using at least three people to assemble it.

But, Sideshow won’t always make you need to steal and sell Infinity Stones to be able to afford one of its figures.

Thanos, for example, returns to Earth in Sideshow form. The Marvel overlord stands 41.5 centimeters tall as a 1:6 scale figure. He comes with LED lights and many interchangeable hands, clothes and parts.

You have time to hide the Infinity Stones. Thanos doesn’t arrive until 2019, sometime between April and June.

Who lives in a pineapple under the sea? Not KidRobot.

But, the Boulder, Colo., -based company is back from its recent trip to Bikini Bottom with a new series of SpongeBob Squarepants Blind Box Mini figures.

The Nickelodeon character changes his visage multiple times in the 14-piece collection dubbed the “Many Faces of SpongeBob.”

Sticking with the animated theme, KidRobot also drives us to Springfield with a new series of The Simpsons Crap-Tacular key chains.

6 thoughts on “Three Options For Collecting Outside Of Funko”