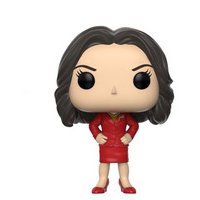 Bernie Sanders, Donald Trump and Hillary Clinton might have their own Pop! figures, but no one owns the political realm — and Funko’s Pop! Veep collection — quite like Selina Meyer.

Veep’s term will hit its limit with its seventh and final season in 2019. Fortunately for you, the Pop! Television: Veep collection will be sworn-in in September. Preorder yours today.