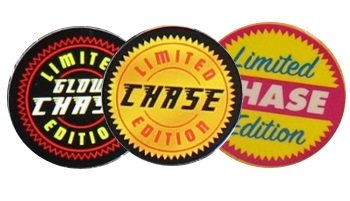 While every other set these days get a chase piece, the elusive “Chase” sticker was not always so common. In the early days of Funko rarer pieces were often called “chase” pieces by collectors, but it would take 9 years before Funko would use that title officially. With the announcement of the Star Wars Wacky Wobblers in April 2007, the first chase pieces were announced too. Collectors wouldn’t get their first views of them until Funko Funday that summer where some were given out to the crowd. The first wave on Star Wars Wacky Wobblers would each come with 1-in-36 chase piece. While current Chases pieces are Painted a different color, Metallic, Glow-in-the-dark, or even a complete new mold, these first chase pieces were simply the normal Wacky Wobblers standing on a Chromed Color base instead of the normal painted Black base.

You can click here to see all of Funko’s Chase pieces.