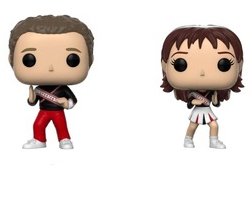 Arianna and Craig raise the roof for Funko’s newest line of Pop! SNL vinyl figures expected out later this autumn, right around the time the iconic NBC sketch show returns to the air for its 44th season.

This is the eighth Pop! for Will Ferrell, who can also be found as Ricky Bobby, Gene Frenkle (More Cowbell) and Brennan Huff. Lest we forget his four Elf Pop! figures.

The Spartan Cheerleaders take to the sidelines in October, a month after Roseanna Roseannadanna and Drunk Uncle hit the shelves. Preorder yours today.