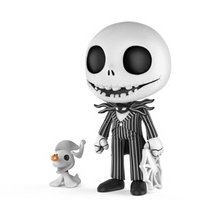 For it is plain as anyone can see, Funko’s 5 Star Nightmare Before Christmas collection was simply meant to be.

Funko has resurrected Jack Skellington and his pals into its latest 5 Star series, which packages detailed vinyl figures with relevant accessories in a stylish window box.

Skellington, along with his sidekick Zero, join Sally and Oogie Boogie, as well as his henchmen Lock, Shock and Barrel for a six-figure set.

The Nightmare Before Christmas is the third license in Funko’s 5 Star franchise, following Harry Potter and DC Super Heroes, whom made their debut earlier this year.

5-Star – Disney’s The Nightmare Before Christmas kicks-off its holiday season in mid-August, but you can preorder yours today.