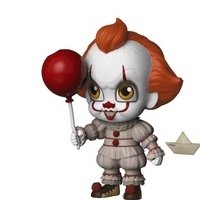 Just when you thought it was safe to close your eyes again at night, Funko introduces its latest line of 5 Star: Horror figures.

Pals Freddy Krueger and Jason Voorhees team up once again, this time as part of Funko’s newest vinyl line. The duo is joined by the equally terrifying Chucky and Pennywise.

The 5 Star line packages its figures in a stylish window box and includes relevant accessories – such as Pennywise’s balloon and paper boat or an extra set of claws for Krueger.

Early sets in the 5 Star line featured the likes of Harry Potter, DC Super Heroes and the Nightmare Before Christmas.

The fright begins in October in time for Halloween, but your can preorder your today.

One thought on “Funko Brings The Fright With 5 Star: Horror Collection”