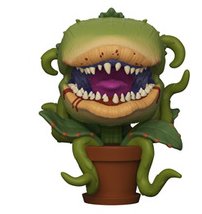 What are you going to do in the middle of the night when your starving Audrey II Pop! Little Shop of Horrors figure starts asking you to feed it?

You feed it. That’s what you do.

But, the true star of the collection, naturally, is Fulquard’s namesake Audrey II.

The cantakerous plant sprouts a common version, as well as a bloody chase variant with a one-in-six rarity and a Baby Audrey II Target exclusive.

For those brave souls who aren’t afraid of meeting the same fate as Scrivello, Audrey II also arrives later this summer at Hot Topic in SuperCute Plushie form.

The Pop! Movies: Little Shop of Horrors collection isn’t available until August, but you can preorder yours today.