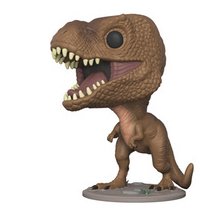 The 10-inch Target exclusive T-Rex gnashed its way to an easy victory with 539 of the 1,254 votes in a poll of our favorite dinosaur Pop! figures that ran from June 21 through July 13. That was close to 200 more votes than the next closest dinosaur.

Blue (Fallen Kingdom) stole 341 votes away from the mighty T-Rex and a field of Pop!s the spanned the Jurassic Park and World franchises. But Owen Grady’s prehistoric protege couldn’t overcome the giant lizard, who earned 43 percent of the votes.

Blue, however, proved much more popular than his fellow Velociraptor by a whopping 267 votes.

Fans also let us know which Dilophosaurus is clearly the best. That would be Frills Out (126 votes). Take that, Frills Down! In fact, the Dilophosaurus (Frills Down) was the poll’s least favorite dinosaur Pop! with a paltry 32 voters supporting it.

Perhaps not enough people have seen Jurassic World: Fallen Kingdom, yet, as the Indoraptor and Stygimoloch butted heads with just 62 and 80 votes, respectively.

Who did/would you vote for and why?

Don’t forget to vote on the new PPG poll, where we debate which of the greatest tandems in music history should be made into Pop! Rocks 2-Packs (Tupac, perhaps?).