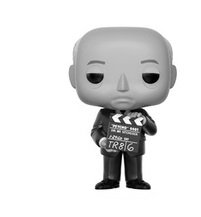 Funko’s newest addition to its Pop! Directors collection is for The Birds. As well as for Vertigo, Notorious and Psycho, the latter which is featured on the clapperboard of the new Pop! Alfred Hitchcock vinyl figure.

The legendary film director joins the likes of James Wan, Paul Feig and Guillermo del Toro among those immortalized in Pop! form.

Hitchcock would make a nice pairing with the Pop! Movies Norman Bates figure, who also comes adorned in black-and-white. The true Hitchcock fans can also find two Mystery Mini Horror figures and a Wacky Wobbler dedicated to the director.

Pop! Movies: Alfred Hitchcock doesn’t debut until October, but you can preorder yours today.