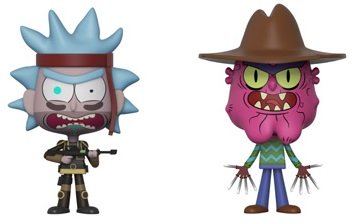 The Council of Ricks, as well as Funko, have dispatched a new line of Vynl. Rick and Morty 2-packs featuring some of the show’s more notorious villains.

Scary Terry joins SEAL Team Rick in a Vynl. 2-Pack that is expected to hit stores in August. In November, Unity teams up with Rick and his Sombrero for another 2-pack tandem.

These are the second and third Vynl. figures in the franchise, joining the original Rick and Morty 2-Pack released earlier this year.

Preorder Rick with Sombrero & Unity From