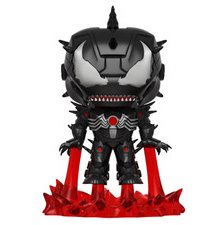 The Symbiote has invaded Funko’s headquarters, embodying a new line of vinyl Pop! Venom figures in time to celebrate the anti-hero’s 30th birthday.

The company has announced a nine-piece set – including four shared exclusives – dedicated to Venom’s three-decade reign of torture throughout the Marvel Universe.

Eddie Brock, the original Venom, joins a slew of Marvel all-stars having their bodies possessed. Among the others being venomized are Captain America, The Hulk and Iron Man.

Carnage (Cletus Kasady) receives two new Pop! figures, one of them an FYE exclusive featuring the full Venom suit and axes for hands.

Funko’s Pop! Marvel – Venom Series doesn’t succumb to the Symbiote until September, but you can preorder yours today.