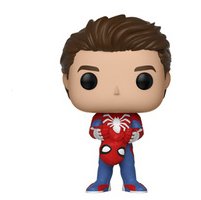 Funko casts its web back into the Pop! Spider-Man universe with a new collection of vinyl figures dedicated to Sony’s upcoming PS4 video game featuring Spidey and his pals.

< Yeah, we’re as surprised as you are about that. >

No collection is complete without a villain. Mister Negative aptly plays that role in the four-figure set.

The Pop! Games: Marvel’s Spider-Man quartet won’t go on sale until Sept. 7, but you can preorder yours today.