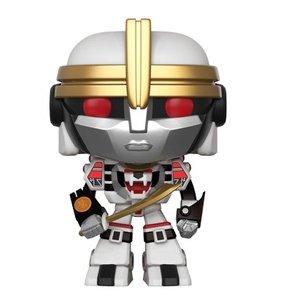 Funko is taking the fight against Rita Repulsa back to Angel Grove, Calif., with a new arsenal of Pop! Power Rangers vinyl figures.

The notorious villain is part of a 17-piece Pop! Television collection that includes several retail exclusives and the addition of a new character to the company’s 10-inch Pop! family. What better way to celebrate the Power Rangers’ 25th anniversary?

Rita teams up with Lord Zedd in individual and 2-Pack form for a Books-A-Million exclusive. It’s the Pop! debut for Zedd, as well as for Goldar, Pudgy Pig and Pumpkin Rapper – the latter two exclusive to GameStop.

Here’s where things get bigger. Literally.

Dino Ultrazord lives up to its name as Funko’s latest 10-inch Target exclusive.

For added measure, the company will also release a HeroWorld 2-pack featuring Goldar and Lord Zedd this autumn.

The new collection doesn’t power up until August, but you can preorder yours today.