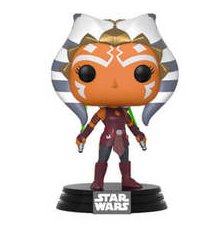 The Force is strong with Funko, who reunites Anakin Skywalker and Ben Obi-Wan Kenobi in its new line of Pop! Clone Wars figures.

The company wedges us between Star Wars Episodes II and III with a five-figure Pop! Star Wars set dedicated to the 2008 animated motion picture and subsequent Cartoon Network series.

Teaming up with the duo is Yoda and the padawan the Jedi Master sent to train under Skywalker…Ahsoka.

It is Ahsoka’s third and fourth Pop! figures and second Hot Topic exclusive, following her Star Wars Rebels Pop! in 2016.

Adding a little villainy to the new collection is a pair of 2018 San Diego Comic-Con exclusives.

That means you might have to do your best impression of notorious bounty hunter Cad Bane to hunt down the new…well…Cade Bane Pop! figure. You’ll also be able to build out your army with a new Pop! Star Wars: Solo: A Star Wars Story – Imperial Stormtrooper.

The battle doesn’t take to the stars until August, but you can preorder yours today.