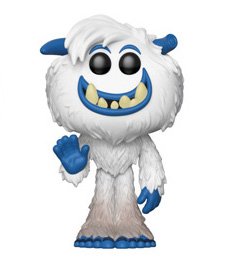 It’s time to believe. Time to accept that Funko’s Pop! Smallfoot collection, not only exists, but also is something you want to invite into your home.

The company is getting a jump on the Warner Bros. animated picture “Smallfoot” ahead of its autumn release with a series of Pop! and plush figures.

The new five-piece Pop! Movies collection introduces us to Migo (voiced by Channing Tatum) and his tribe of fellow yeti — whom don’t believe in the mythical creature known as the smallfoot.

Smallfoot, naturally, would refer to humans, aka Percy (James Corden).

Joining the unlikely duo are bigfeet Meechee, Fleem and Stonekeeper.

Look for them on shelves in August.

They might be a little gruff and icy to hug in real life, but Funko’s new line of Plush: Smallfoot should make for some good snuggles on cold nights.

The series of plush dolls features Migo, Meechee and Fleem, as well as Kolka.

Look for them in July.