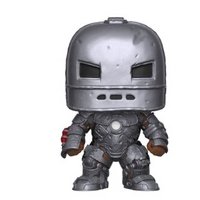 The company introduced seven new Pop! Marvel figures, as well as new Dorbz and Rock Candy items in yet another busy day of SDCC announcements.

Funko’s Funimation booth is where the action takes place July 19-22 at the San Diego Comic-Con. Look for them at Booth No. 4135.

Taika Waititi is the latest member of the Pop! Directors fraternity, joining James Wan (Aquaman, 2018) among this year’s SDCC reveals.

Waititi is best known for directing 2017’s “Thor: Ragnarok,” as well as the short film “Two Cars, One Night.”

As for the pineapple outfit? It only seemed natural for Funko to adorn the Academy Award nominee with the same pineapple garb he donned at the 2017 San Diego Comic-Con.

You’ll have to be savvy, however. Waititi is limited to 3,000 pieces.

The highlight of the new Pop! Marvel figures, however, might be the debut of Kraglin from “Guardians of the Galaxy Vol. 2.”

Red Skull makes his Dorbz debut at this summer’s San Diego Comic-Con alongside Captain America, a man who need no introduction to the Dorbz family. Steve Rogers’ alter-ego has six previous Dorbz figures, including a 2016 SDCC exclusive.

Jessica Jones returns to the Pop! Marvel universe, following up her 2017 Pop! with a new Rock Candy figure.

In case you missed it…

Funko has added to its San Diego Comic-Con Dragon Ball Z reveals with a metallic version of Whis.

The Pop! Animation figure is a variant of the original 2017 version of the angel.