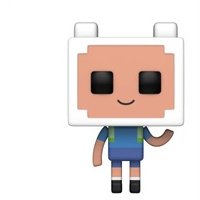 The Land of Ooo is getting a restyling with Funko’s new Pop! Adventure Time/Minecraft crossover collection.

Finn the Human and his brother Jake wander into the world of Minecraft, where they’re transformed into Pop! block form. There, naturally, they run across Princess Bonnibel Bubblegum and Marceline Abadeer.

Funko’s series pays tribute to the upcoming crossover episode between the two franchises that was recently announced by the Cartoon Network. Entitled “Diamonds and Legends,” the episode is one of the last four in the 10th and final season of Adventure Time. It’s slated to air on July 20.

This isn’t Finn and Jake’s first foray into the realm of Minecraft. Adventure Time received its own “open world building game” treatment in May of 2017. Now it’s time to return the favor.

The Pop! Television: Adventure Time/Minecraft doesn’t crossover until July, but you can preorder yours today.