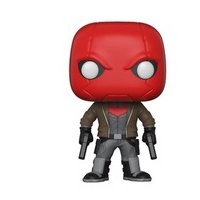 It was a DC Comics kind of day for Funko, who unveiled another round of reveals in the lead up to the 2018 San Diego Comic-Con.

Villains dominated the upcoming releases with the likes of Red Hood and the Killer Moth making their Pop! debuts.

Red Hood is finally getting his Funko due with a brand new Pop! Heroes figure. The DC villain’s previous Funko incarnations were limited solely to a Mystery Mini released in 2016.

The Killer Moth makes his Pop! debut alongside Red Hood this summer. The DC super villain takes on Teen Titans Go! form and comes with his tiny sidekick Silkie.

It’s doesn’t matter what color The Flash takes on, his Pop! figures are sure to sell quickly. Funko has dressed The Flash up in a running pose and gave him an additional 3-pack variant set with metallic gold, red and silver versions of the Pop! Heroes figures.

You might not know James Wan’s name, but his films have surely kept you up at night. The Australian director is the man behind such motion pictures as “Furious 7” and the upcoming “Aquaman” film, as well as the Insidious and The Conjuring franchises. He’s, arguably, best known, however, for creating “Saw” and its terrifying antagonist Billy the Puppet.

Stay tuned each afternoon for a recap of the day’s 2018 San Diego Comic-Con Funko reveals.