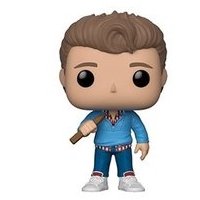 If you can stomach a few vampires, then Funko’s Pop! Lost Boys series might be the figures that sit in your collection for all eternity.

We’re traveling back to Santa Carla, Calif., for a Pop! Movies reunion with the cast from the 1987 cult hit “Lost Boys,” courtesy of a five-figure set due out this summer.

Emerson joins his brother Michael Emerson in Pop! form to take on David, who comes with a carton of worms.

Frog is, also, paired with his brother Alan for a Funko Shop exclusive Frog Brothers 2-pack.

You can’t invite the Pop! Lost Boys into your home until July, but you can preorder yours today.

One thought on “Invite The Pop! Lost Boys Into Your Collection”