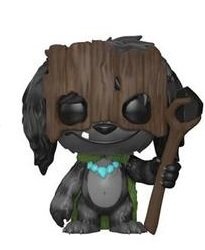 Butterhorn and the Pop! Wetmore gang will set out on the path into the forest of Funko’s imagination this summer with a monstrous new adventure.

The road that leads from Funko takes us on a journey to discover the monsters of Mount Shuskan with a collection of vinyl figures and an online game. The nine-Pop! set follows up the original Pop! Monsters Wetmore set and Winter Series (Flocked)(6-Pack) released in 2017.

The new quest introduces us to Grumble and the wise elder Sapwood Mossbottom – as well as Smoots, Mulch, Liverwort and Angus Knucklebark. All of whom are looking to avoid running afoul of Magnus Twistknot.

Meanwhile, Slog and Grub slough their way through the kingdom with both common and a closed-shell chase edition.

Pop! Wetmore makes its debut on June 22. The collection is available exclusively via the Funko Shop.