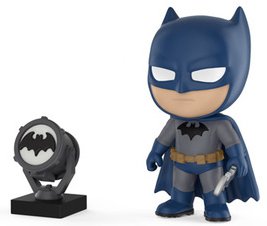 Batman and Batgirl join forces to take on Harley Quinn, Poison Ivy and, of course, The Joker as Funko introduces its new line of 5 Star: DC Super Heroes.

The figures, styled from the classic Batman television program, are packaged in a fashionable window box for a sleek-looking display.

The 5 Star: DC Super Heroes series is the second franchise in Funko’s 5 Star collection, joining Harry Potter when the new line of figures debuts in August.