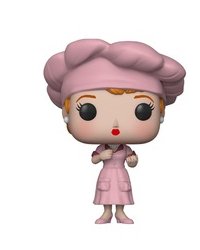 Everyone loves Lucille Ball. Now you can fall head-over-heels with the comedy pioneer all over again with Funko’s new I Love Lucy Pop! series.

The country’s most beloved redhead is available in a standard Pop!, as well as in her factory uniform from her iconic (and hilarious) attempt at joining the workforce. Both figures also arrive in black-and-white Target and Barnes & Noble exclusives.

Lucy and Ricky are available in August, but you might want to preorder yours. The I Love Lucy Pop! figures could move faster than chocolate on a conveyor belt.