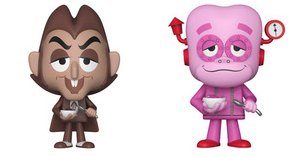 They say good things come in pairs. Funko has proved that axiom true with several new tandems of Hikari and Vynl. figures.

Funko celebrated Friday the 13th by releasing Count Chocula and Franken Berry in a Vynl. 2-pack. The Monster Cereals duo is a limited edition and available now exclusively through Funko Shop.

The company dipped into DC Comics’ “Justice League” for its next Vynl 2-Pack, this time honoring Batman and Wonder Woman. Expect these superheroes to swoop in to the rescue together sometime around June.

Rounding out Funko’s latest releases of two-fers is its new rendition of Hikari XS figures. Iron Man gets the treatment this week, arriving in glittery red and gold versions.