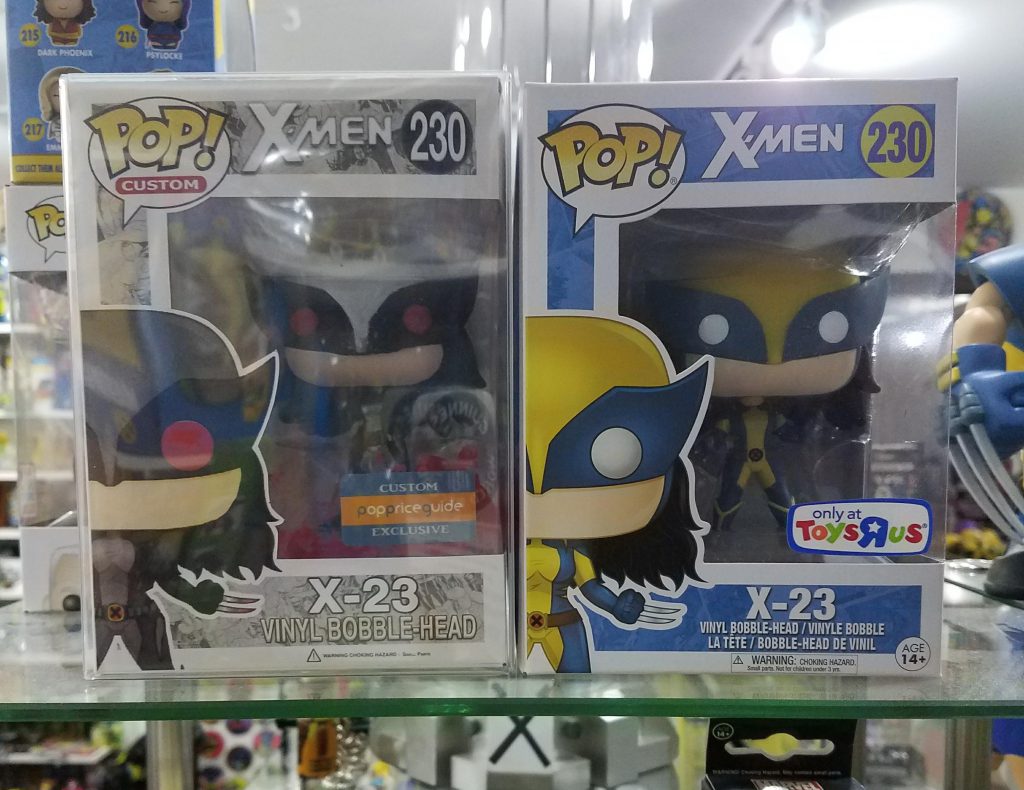 Back in December we asked an artist to create an extremely limited number of custom X-23’s. Little did we know, when the idea of the commissioning a PPG custom began, what a cool story and adventure one of the custom X-23’s would be taking.

In the hours following the fervent sale of the custom X-23, we received one very cool message from a user interested in getting a hold of her for a very personal AND public collection, but she was sold out. As fate would have it, we received one return which went to collector Eric Jaskolka and is now sitting very happily amongst more than 16,000 other mutants and mutant inspired memorabilia in the Guinness World Records “Largest Collection of X-Men Memorabilia”!

When we found out where she had landed we HAD to get some pictures and the story behind Eric’s amazing collection. So, with X-23 amongst her mutant brethren, we decided to ask the human side of story.

PPG: What and when did you start collecting?

I started collecting comic books in 1989 and the toys in 1990. Uncanny X-Men #268 was my first X-Men comic.  Initially I collected only action figures and the playsets.  Around 1994 I started collecting other X-Men items and by 1999 I bought anything that had X-Men on it or related to X-Men.

PPG: Has your collection always been X-Men focused?

When I started reading comics I would buy just about any comic, but ended up focusing on X-Men.  I traded in all my non X-Men comics in the early 90’s to buy back issues of X-Men.  At the time the Death of Superman, Knightfall and all the Valiant comics had high values so I was able to get  back issues of Uncanny X-Men, X-Factor, Excalibur, New Mutants and Wolverine.

PPG: Who is your favorite mutant? Hero or Villain

Wolverine is by far my favorite, I also like Magneto.  Well, I guess Magneto when you think about him is not really a villain.  I do like the way Mr. Sinister and Apocalypse are written as villains as well.

PPG: We’ve all thought about it, so what is your hypothetic superpower?

Speed, I am a runner and am always pushing myself to go faster.  I would like the Flash’s powers.

PPG: When did you decide that you wanted to have the world’s largest X-Men collection and how long did it take you to get recognized in Guinness as having such a large and amazing collection?

I did not have aspirations to have the world’s largest collection, I just enjoyed collecting X-Men.  In 2012, after about 23 years of collecting X-Men, I looked at my collection and the size of it and wondered what does it take to have the largest collection and is there such a thing.  So I contacted Guinness and they did not have a record for X-Men, they had Batman, Superman and Spider-Man but no X-Men.  In June 2012 I submitted my paperwork and in early September 2012 I received my certificate in the mail.  That was my first notification that I had won, it was pretty awesome to hold the certificate in my hand and then see my name on their website.

That is a tough question, like which is your favorite child!!  I have several favorite items but one of my earliest items is a prototype of an unreleased action figure playset line from Hornby which is based in the UK, this is from 1990.  It is a Wolverine figure in a playset fighting a cardboard Wendigo.  Marvel ended up aligning with ToyBiz and made Pocket Comics  My favorite Funko item is Pop! Sabretooth and Archangel figures.  Funko did a really nice job of taking these somewhat menacing looking characters and making them look cute and innocent.

PPG: Do you remember the first non-comic book item you got as “A Collector”? How about your first piece of Funko?

The first item other than the comics was the first series of X-Men ToyBiz action figures in 1990.  My first Funko item were the X-Men Wacky Wobblers in 2008, that series at Magneto, Storm, Cyclops, Wolverine in is yellow blue costume and the exclusive Wolverine in brown costume.

PPG: What is your favorite collectible brand/manufacturer? (You don’t have to say Funko haha. We are actually hoping to add some other brands to the guide and think it’d be great to be featuring other collectible brands).

Wow that is a tough question because I have so many cool things.  I like the detail and art of the Bowen statues and mini-busts; I like Minimates due to the large variety of characters made, I like a lot of the small collectibles lines like BoonkaZonks, Nog’nz, Beanz, Squinkies, Chibis and Marvel Dice figures because they are low cost and fun designs.  Of course the original ToyBiz figures that started it all are included as favorites.  Funko is doing a great job with the Dorbz, Pop’s and minis.  I like when a brand/manufacturer makes many characters so you can have a variety vs making many versions of Wolverine. While Wolverine is my favorite I do think there is way too much merchandise of that character when there are so many other cool characters like Storm, Gambit and Rogue that don’t get enough merchandise made.

Eric was featured in another great article showcasing his collecting on the Guinness World Record site, including a really great video interview. Let us know what you think about this amazing collection!

4 thoughts on “One Super Collector, One World Record and PPG”