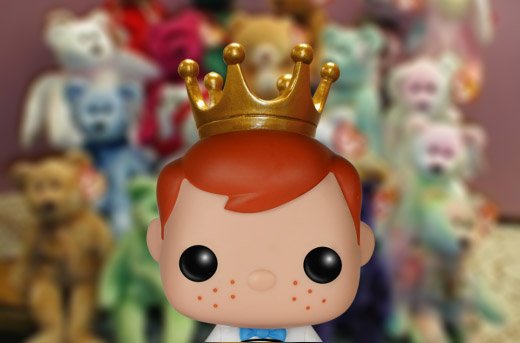 The following is an article by guest writer Lee B.

Why Pops Aren’t “The Next Beanie Babies

We’ve all heard the popular theory that Pops are the next Beanie Babies, meaning they are simply another collectible fad that will quickly fall off a cliff and lose all its value. But we all want to know: is it truly inevitable that this will happen? My personal belief is a resounding ‘No’, but let’s look at both sides of the argument. To do this, we need to analyze the rise and fall of Beanie Babies, as well as how Pops have become one of the top collectibles in the world. But let’s start with the history of Beanie Babies:

Ty Inc. started manufacturing Beanie Babies in 1993 with a series of 9 stuffed animals. They didn’t become popular until late 1995, at which point they took off as collectors scoured their local toy stores, Hallmark locations, hobby stores and anywhere else that might carry them. They would quickly get snapped up and end up on ebay to be flipped. The primary reasons they had mass appeal were: 1) some were produced in limited quantity, 2) some would become retired and hard to find, and 3) they were marketed as a collectible rather than a toy. Sound familiar? Yes, these are also some of the reasons Pops have become the rage. But I think this is where the similarities end. So anyway, they started losing steam in 1999 and were almost completely out of the public eye by 2000.

Now, let’s look at Pops: Funko started making Pops in 2010 (initially called ‘Funko Force’) with a small line of licensed DC characters to be auditioned at the 2010 San Diego Comic Con. Opinions were initially mixed, but overall the concept seemed like it had legs. So Funko decided to abandon their plastic clamshell package for a box with a window, and they rolled out the Pop line for their DC, Marvel and Star Wars licenses. The rest was history- it didn’t take long for them to become very popular with collectors which caused the pop culture licenses to come rolling in. That brings us to where we are now- a collectibles marketplace where Funko Pops are king and getting seemingly bigger every day. So let’s take a look at why I feel Pops will not nosedive anytime soon in the same way that Beanie Babies did.

As long as Funko hitches its wagon to things that are already incredibly popular (Star Wars, Game of Thrones, etc…), there will be a collector for it. Even the less mainstream lines with niche appeal, like Hanna-Barbera and Pop Asia, are popular among many collectors. It would stand to reason that as long as Funko stays the course and keeps churning out Pops for things that are popular with American culture, there will always be collectors that will want them. Maybe certain lines will start to lose the interest of collectors due to the decline in popularity of that movie/show/video game (looking in your direction Domo and Ghostbusters reboot), but that’s more a function of the content rather than Pops themselves. Contrast this with Beanie Babies, which were essentially a glorified stuffed animal. There were a few that were connected to popular icons, such as Princess Diana and Jerry Garcia, but the vast majority of them were random animals in random colors. There’s no emotional connection between collectors and, say, a purple giraffe, but there is between collectors and Daryl Dixon or Winnie the Pooh.

Anybody who was collecting anything in the 1990’s (myself included) should be able to remember what it was like- EVERYBODY collected EVERYTHING. You could dig around in any random kid’s room and find sports cards, video games, action figures and/or dolls, Pokemon cards, autographs, maybe some coins, and of course Beanie Babies. It was just the thing to do, and people had a lot more disposable income to buy that stuff than they do now (more on this later). Things are a lot different now. As a buyer and seller of Pops, I’ve asked more Pop collectors than I can count what made them start collecting. The most popular answer (and it isn’t even close) has been something along the lines of “I was bored and looking for something to collect”. Sports card manufacturers stupidly priced out the average collector by the early 2000s, and most other collectibles have fallen by the wayside for one reason or another. So while Beanie Babies took off as a “want” at a time when collecting was the thing to do, Pops actually filled a “need” to collect in an effort to provide a brief escape from the stresses of their daily lives. Afterall, that’s what collecting is, right? A reason to focus on something that brings you pleasure rather than your job, bills, responsibilities, and everything else that stresses you out. So unless a collectible comes along that’s bigger and better than Pops to provide that escape for us, Pops are here to stay. And nothing else is even on the horizon as far as I can tell.

The reason everybody collected “stuff” in the late 90’s was because everybody had money and were looking for ways to spend it. The U.S. economy started seeing huge growth around 1995 due to many factors, one of which was the popularity of new computer and cell phone technology. This lasted until about 2001, which almost exactly coincides with the rise and fall of Beanie Babies. Talk to the average millennial right now and they’ll be happy to tell you how the economy is treating them at this moment (spoiler alert: it’s not good). I’m 41 and I’ll be the first to say that our generation left the millennials a huge mess of an economy to clean up. Between the banking crisis, housing collapse, artificially inflated dot com boom, and all the other crap we pulled, it’s a wonder that anybody today has two nickels to rub together. But the millennials keep powering on, taking lower paying jobs than they deserve, and overpaying for education that provides no guarantee of a future career. So what does this have to do with Pops? Glad you asked. All of these struggling millennials with insufficient paychecks are STILL collecting Pops even though they can’t necessarily afford them (I can hear their heads collectively nodding as they read this). This is how appealing these things are! So if Pops have enough mass appeal to keep them going under these current sub-optimal economic conditions, it stands to reason that the market should be fine for a while.

It’s funny, I always hear the reasons that people think Pops will go the way of Beanie Babies: too much too fast, too many chases, flippers, etc… But the very few negatives are outweighed by the overwhelming positives that I think have brought this hobby to the forefront, which is why I think it will continue to thrive for many years to come. And even if the worst does happen, there are still Beanie Babies that command in the thousands (Don’t believe me? Check ebay’s completed sales), so there will always be a buyer for your Pops if you choose to leave the hobby.

Lee started the online Pop shop 7bucksapop.com and created the PopShield Pop protector. He’s also been a collector and dealer of various collectibles since 1989. He can be reached at 7bucksapop@gmail.com.

We are always looking for guest writers! If you have some content you’d like to post on PPG, please send us an email at team@poppriceguide.com and let us know!

34 thoughts on “Guest Article: Why Pops Aren’t “The Next Beanie Babies””