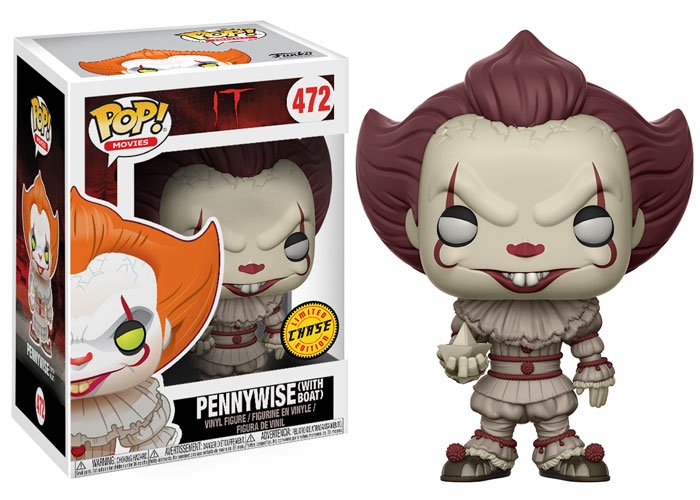 Pennywise:  EEX-ACTLY! Go on, kiddo… Take me! [Georgie stares, unsure about reaching into the vault for his canceled chase Pennywise].  Aww… you want me, don’t you, Georgie? Of course you do… and there’s, reaction figures, plushies, and all sorts of canceled Pops! down here… and sepia chases too!  All colors.”

Georgie:  Do they float? [reaches for his chase]

Pennywise:  [face begins changing from a smile to a frown] Ohh yes… we float Georgie… we float… and when you’re down here, with me… YOU’LL FLOAT TOO! [Chase Pennywise grabs Georgie’s arm and pulls him toward the vault]

It was confirmed earlier today that the new Chase Pennywise Pop! from the popular movie remake of Stephen King’s ‘IT’, are being canceled due to licensing issues.  Although at first it seemed unlikely a widely produced (1/6) chase variant would have a large swing in value, current E-Bay sitings of the chase figure have already seen a dramatic uptick in pricing.

Keep in mind, speculation often time causes an artificial incline in value, and like many other Pops! that have been canceled, retired or vaulted before, Chase Pennywise is likely to settle back down with a bit of time and patience.  However, if you want one for retail, it’s likely a good idea to find one before the current stock disappears from shelves.

Thank you to Danni from the Facebook group, Funko Experts, for obtaining this information for the community.