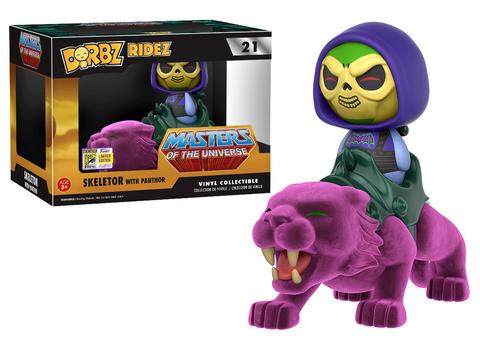 Wave 9’s theme is miscellaneous. These were the exclusives Funko didn’t know where else to put. Starting off with 2 new Five Night’s at Freddy’s Sister Location Pop! exclusives, Jumpscare Funtime Foxy and Jumpscare Baby. Earlier this week, Funko revealed the Sister Location Pop!s, so it’s nice to see 2 more additions. Neither of these 2 are numbered, so hopefully they will be shared for all you FNAF fans. Moving on to Elder Scrolls, Funko revealed a super-sized 6-inch Dwarven Colossus Pop!. Dr. Seuss fans will want to pick up the new Flocked Lorax Pop!. This one is no surprise as it was leaked earlier with pre-orders already come and gone, from Mighty Morphin Power Rangers comes the super-sized 6-inch Megazord! None of those are numbered, so there is a good chance they will be shared. Now for the MOTU fans. Many of you have been waiting for new additions and the wait is over! First up is a Glow-in-the-dark Scare Glow Pop!. Next up is what looks to be a flocked Panthor being ridden by Battle Armor Skeletor Dorbz Ride. This Dorbz ride will be exclusive to Toy Tokyo at SDCC. Finishing out the MOTU exclusives is the Rock Candy She-ra. She-ra is limited to 1250 pieces according to the reaveal video. Rounding out the miscellaneous wave is a treat for long time Funko collectors. Funko is brining back Sike-O-Shriner, this time in Pop! form. According to the reveal video, Sike-O-Shriner is limited to 1000 pieces. This concludes another wave, check back with us next week for more waves!