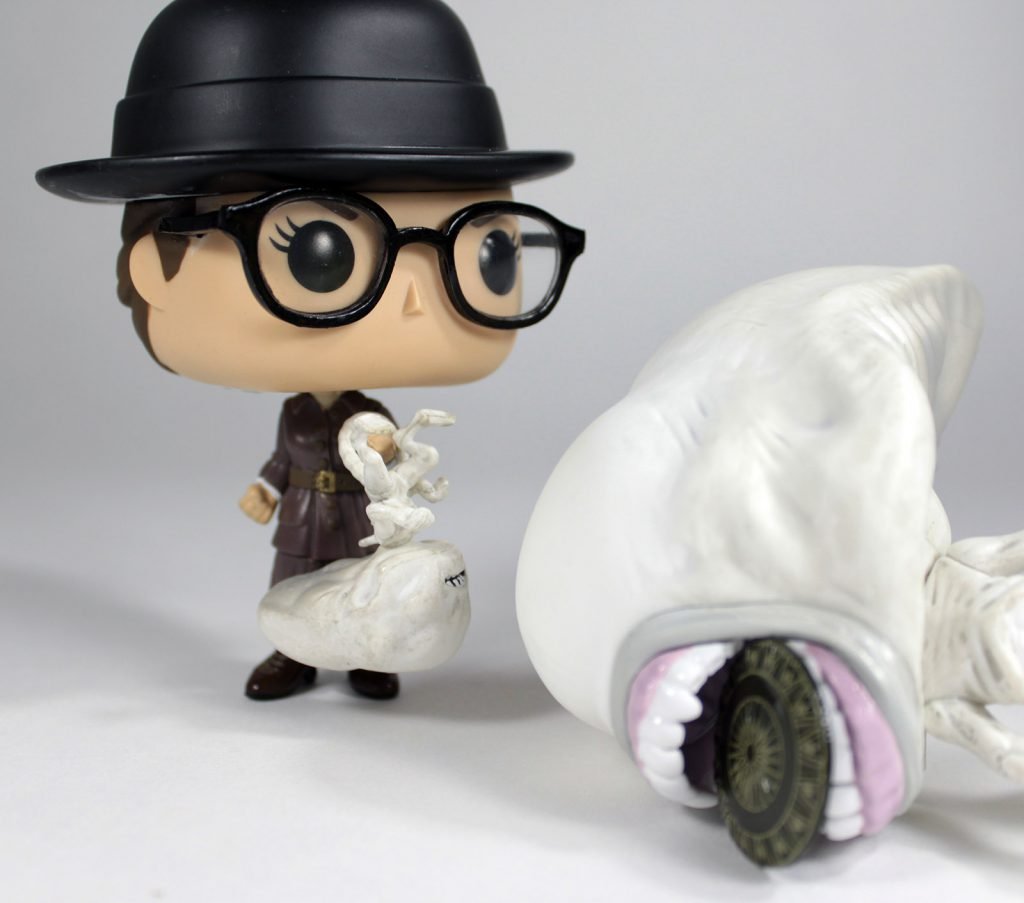 2017, like most of the past several years, has provided us with hit after hit in the movie theaters. Two of the biggest recently have been Alien: Covenant and Wonder Woman, and our good friends at Entertainment Earth were kind enough to send along a couple of Pop Vinyls representing each of these films. Today, let’s take a look at the Neomorph & Toddler from Alien: Covenant and EE exclusive Diana Prince. Since these movies are still in theaters, please be aware that spoilers may be present.

The Neomorph is a new take on the Xenomorph creature found in the previous Alien films, but with a few distinguishing features such as the human-like tongue and gums and the pale skin. We first saw the Neomorph at the end of the first film in this series, Prometheus, though it had the darker skin more familiar to the alien creatures, and was dubbed as Deacon at the time. The pale white Neomorph is one that would have some trouble standing were it not for its tail, which provides extra support as it leans slightly backward. A little adjusting to the tail and/or legs would easily allow the creature to stand a bit more upright. The Neomorph comes with a “toddler”, and now that I’ve seen the movie I realize it is not the offspring of a Neomorph itself, simply a Neomorph in the smaller, earlier stage of life. It’s an adorable little bugger, standing just over an inch tall. It can also have some issues standing as well, as the legs are a bit flimsy when it comes to supporting the creature’s giant noggin. But, as you can see in the pics, I managed to get him to stand OK with a little effort. The Neomorph has a single point of articulation, that at the neck. It’s a bit tough to get his neck rotating at first, as the spikes on his upper back tend to keep it in place. Just a little effort, though, and his head turns just fine.

Moving in a different direction, let’s take a look at Diana Prince from the blockbuster and unsurprising success, Wonder Woman. This Pop is an Entertainment Earth exclusive and features the heroine lead in her alter ego clothing. Just a small town girl trying to fit in with the male-dominated society of the early 20th century. Wonder Woman’s alter ego doesn’t get a great deal of love in the collectible world, but that’s probably because a woman in normal clothes isn’t nearly as exciting to consumers as a hero with the classic garb of Wonder Woman. It’s the same reason we don’t see a lot of Bruce Wayne action figures. It’s nice to see Diana get recognized in Pop form, though, given the multitude of Wonder Woman Pops we already have at our disposal. Even in her “just need to fit in” wardrobe, Diana is equipped with her trusty shield, which clips on to her left arm, bent at the elbow. Diana comes with the clear plastic display stand often found with female Pops, but this one didn’t even need it to stand up – a real surprise given the small feet and particularly heavy head (especially given the added weight of her hat).

While, you can still preorder the Neomorph at Entertainment Earth (for July delivery), the EE exclusive Diana Prince is currently showing as “Pre Sold Out”. But don’t fret – there’s always a chance more will make it to them, or current preorders will be cancelled!

Once again, big thanks to Entertainment Earth for giving us a chance to offer an early look at these Pops!