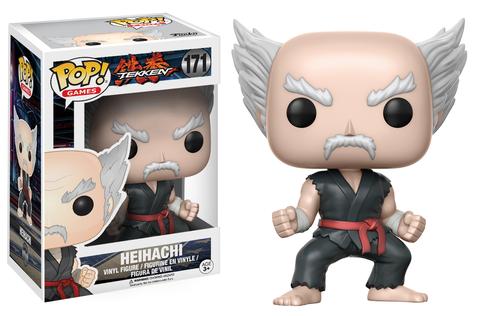 Tekken fans have had their wish come true. The next addition the Pop! Games line is Tekken. Glams give us Heihachi, Tekken King, Jin Kazama, Nina Williams, and Kazuya. Next in the Games line is Mass Effect: Andromeda featuring Sara Ryder and PeeBee. We will also see Retro Video Games Mystery Minis including characters from PAC-MAN, Ms. PAC-MAN, Q*bert, Frogger, Mega Man, and Dig Dug. We got a sneak peek of the Gears of War Wave 2 as well. Wave 2 includes Oscar, Old Man Marcus, Dom, Baird, Cole and a 6-inch Brumak. Last of the Pop! Games line reveal is Wave 2 of Overwatch. Concept art shows Mei, McCree, Lucio, Symmetra, a 6-inch Reinhardt, and D.VA with a 6-inch Meka.

Funko is expanding their Animation Pop line with My Hero Academia and Death Note. Concept art shows Deku, All Might, Katsuki, Tenya, and Ochako. Death Note concept art included Ryuk, L, and Light. Naruto Dorbz are also on the way. Naruto and Sakura are coming some time this year.

Pop! Movies line will see 2 new pops from the upcoming movie Captian Underpants. Our first look gives us concept art for Captain Underpants and Professor Poopypants! Glams for Ghost in the Shell movie have been revealed. Check out Major, Batou, and Geisha below.  Donnie Darko is coming to Dorbz! Look for Donnie and Frank! Reservoir Dogs Pops were next in the Pop! Movies line. Mr. White, Mr. Blonde (with Nash’s Ear) and Mr. Pink all received the Pop treatment.

Pop! Television is getting more additions.  Concept art reveals Elliot Anderson, Mr. Robot, Whiterose, Angela Moss, and Darlene Anderson from the Series Mr. Robot. Adam, Blake, Anders, and Karl from Workaholics are getting the pop treatment. The Walking Dead gets some Mystery Minis of all the dearly or not so dearly departed from the show. Complete your Mystery Minis set with the upcoming “In Memoriam” set. Scroll down to check out the concept art below.