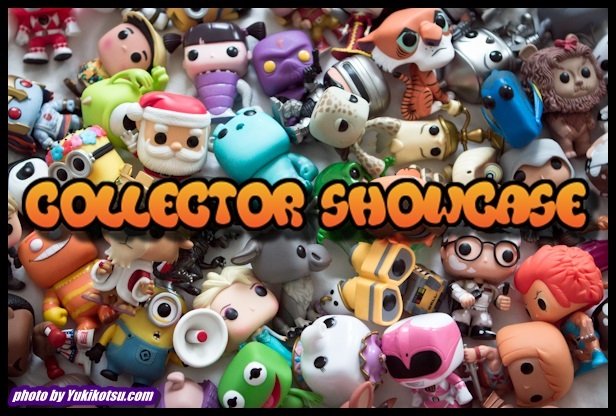 Hello! I’m Megan, a 30 something Librarian in a suburb of Chicago. I’ve been collecting Funko Pops for 6 years now and my house pretty much shows it! I love books, TV and movies, so anytime Funko gets a new licenses, it’s usually something I really love and must have! My husband and I are avid collectors of other types of figures, as well as books, comics and movies. I can be found on twitter @kingdomfaraway and I have my complete collection on PopPriceGuide under kingdomfaraway too.

1. How long have you been collecting Funko products?
I’ve been collecting since 2010 when I first saw the Buzz Lightyear pop at a Disney store. I thought he was just so cool looking, I had to get all the Disney ones I could, and then I realized Funko had many, many more pops.

2. What was your first Funko item?
My very first was the bobble head Buzz Lightyear, followed very quickly by Winnie The Pooh pop. My first collection was the Toy Story pops, although I’m missing Lotso! It makes me so sad that I’m short him for my collection. My husband had collected the Joker Pop on his own and when I started with Buzz, the Joker Pop quickly moved over to my collection too!


3. How many Funko collectibles do you own?
Ha, that’s an ever changing number. I currently own 829 Funko Pops (which doesn’t include some doubles that I have) and about 30 or so Dorbz. I own several shirts and a handful of the home items (like mugs and the salt/pepper shakers). I have a lot of the keychains, pencils and lanyards, as well as almost all of the coffee table books. I own around 30 of the mystery minies as well. I mostly focus on the Pop line, but I don’t turn down Funko products at a good price!


4. Do you have a favorite line or a line you would like to see?
My current favorite line is Harry Potter, being a massive HP fan, I must have all of the Funko HP items. I’m also a really big Stargate SG1 & Stargate Atlantis fan and would love to see both shows in Pop form. I also would love Funko to expand the Lord of The Rings/Hobbit lines to more characters.


5. What are your Top 5 “Must Own” items in your collection?
Hm, that’s a tough question, since I have so many it’s really hard for me to pick only 5, but off the top of my head, I’d have to say, the original Winnie The Pooh, Mike Wazowski, Iron Throne, Bilbo Bagins and any of the Harry Potters!


6. What is your best deal/favorite find story?
My husband likes to tell me that I have Funko sense, which anytime we go to a second hand store, convention or any kind of toy shows, I can immediately find any Pops that may be hiding around. I got really lucky a few years ago, I had missed out on getting a Tigger Pop in stores and it had been long vaulted. My husband showed me a picture of some Pops, a random second hand store was selling and low and behold, hiding out was a lone in box Tigger Pop! You could barely see it, but there he was! I was able to email the store and they agreed to ship him, for retail price & shipping. I got a great deal thanks to my Pop Sense!

7. What line are you most excited about that is yet to be released?
I’m excited that they are expanding the X-Men line, I hope they come out with a Gambit (comic book version) at some point and another Jean Gray/Phoenix would be nice! I know they are being found now, but I can’t wait to get my hands on the Gilmore Girls pops! I’m also very happy they are doing Ratatouille, I haven’t been able to get my hands on the Remy Pop in the hard to find D23 exclusive pack.

8. Do you complete sets with every variant or are you happy to just own certain Pops in a line?
Depending on how much I love the character/movie/tv show/comic, I will get every variant. I have all Harry Potter variants, as well as Buffy The Vampire Slayer and a handful of others. I’ll grab a variant if it’s completely different or is related to the character in some way (like the White Lantern variants, or armless Bucky Barns). I have very few of the bloody, metallic or glitter variants, I don’t go out of my way to get those unless I think they look really cool. Even with all that being said, I still own almost every single random Batman Funko that they’ve come out with!


9. Favorite Social Networking group for News,Buying,Trading or Selling?
I’m a frequent redditor, so I’m often reading their subreddits, I also love going to Pop Price Guide for new information as well as PopVinyls.com.


10. Do you collect any other type of collectibles?
Between my husband and me, we collect a lot of Marvel, WWE, DC, Harry Potter, LOTR and Stargate figures. We collect books & comics, as well as movies/TV shows. We’re suckers for collectible items; we have hundreds displayed around our house!


12. You win a contest for 1 random Pop. What is the one Pop you would dread to see when you open the box and why?
Hmm, I think any of the common current Pops! Although, I never turn down a free Pop, if I already had it (which most likely I would), I’d just gift it along to someone else!


13. Any advice for new collectors or something you wish you’d known when you started collecting? Words of Wisdom?
There are a lot of Pops out there, but don’t pass up a Pop if you see it! When I first began, I often passed on a few (like Red Skull and a few other retired Marvel/DC/Disney ones) because I figured I would get them at a later date. Little did I learn, when they are gone, they are gone!

Send us a message at admin@poppriceguide.com OR on Facebook at POP Price Guide and make sure to mention the “Collector Showcase”. Show us your Pop pics and Fun with Funko on our Instagram @poppriceguide anytime!