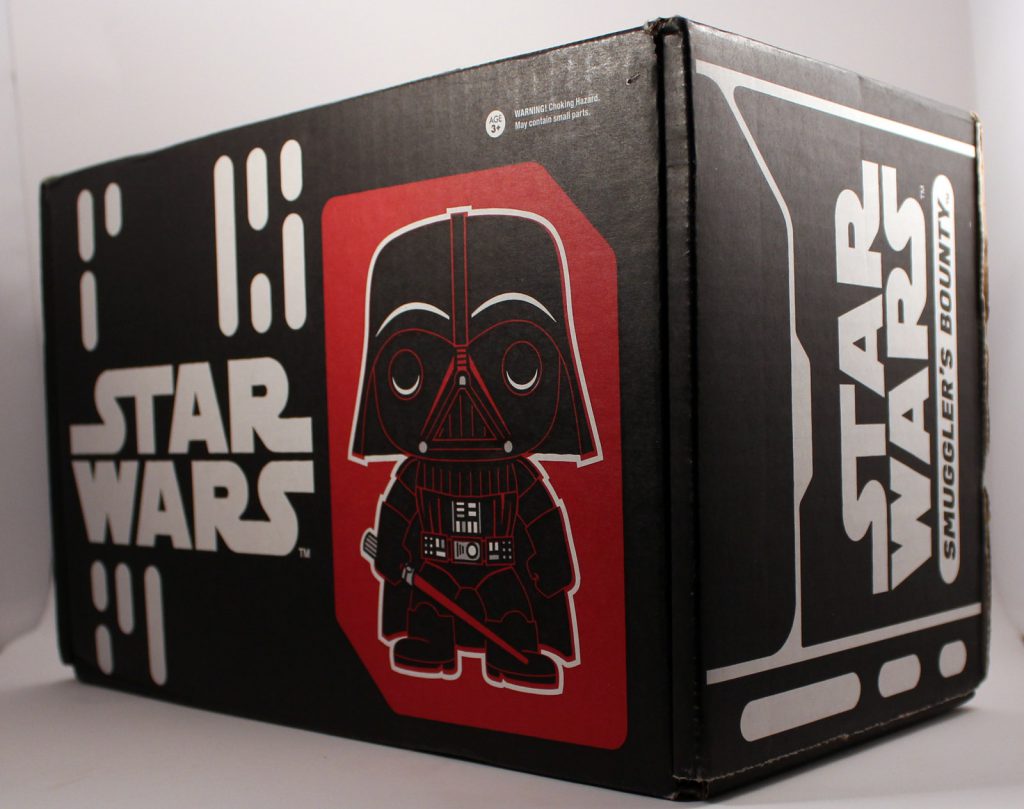 What better time for my Smuggler’s Bounty Death Star Subscription Box to arrive than while playing the new Death Star DLC on Star Wars: Battlefront! Overall, I think this box turned out pretty nicely, though I have a couple of gripes. The contents of the box are as follows:

The pin, the patch…all good, nothing crazy here. While I don’t do much travelling, I will say I like the Death Star luggage tag, just because it’s something new for these boxes and might get some use by others. And it makes more sense than, say, a Batman luggage tag, or Stormtrooper luggage tag.

There’s actually quite a bit to say about the t-shirt. I don’t mind the plain gray, since we usually get black or other dark colors. You can see by looking at the images that the final version differs from that one on the promo card included with the box. The small Death Star emblem has been replaced with a white Death Star backdrop (a plus in my opinion), and Sith Vs. Jedi along with the character names have been replaced with “Vader Versus Kenobi”. I think I would have preferred the latter, but that’s just personal preference. Now, maybe someone can help me with this, because a close-up image and a scanner haven’t, but take a look at Obi-Wan’s name on the stock image. Does that not say “Obi-One”? Given Funko’s propensity for ridiculous errors and poor quality control, this wouldn’t surprise me in the least. If anyone can verify with a clearer pic, I’d be grateful!

Finally, we come to the items everyone looks forward to, the Pop Vinyls. Grand Moff Tarkin, the head of the Death Star and a character that was neglected to be made into action figure form until the 1997 Power of the Force line, finally makes his debut in Pop form. This is no big surprise to anyone, as it’s been teased in Funko’s advertisements for this box for some time. Tarkin is a big hit with me, as he has Peter Cushing’s signature jawline sculpted right in as well as the authoritative pose with his hands behind his back. The second figure (which I guessed correctly weeks ago!) is Darth Vader in an action pose. Now, I would have called this a “Force Choke” version, but look at the box….he’s called “Darth Vader (Bespin)”. Wait…Bespin? Isn’t this the Death Star box? And also, aren’t we getting another action/force choke Vader for Rogue One in a mere two weeks? While I love Vader as a character (who doesn’t?), this is a big fail by Funko. I mean, big. Bespin? Seriously?

Despite my complaints about Vader, this is actually a pretty solid box. Personally, I don’t want to see a ton of stray from the norm in these boxes. Give me a couple of vinyl figures (Pops, Wobblers, Rock Candy, etc), a shirt, and a few other generally worthless goodies, and I’m content as a cucumber.