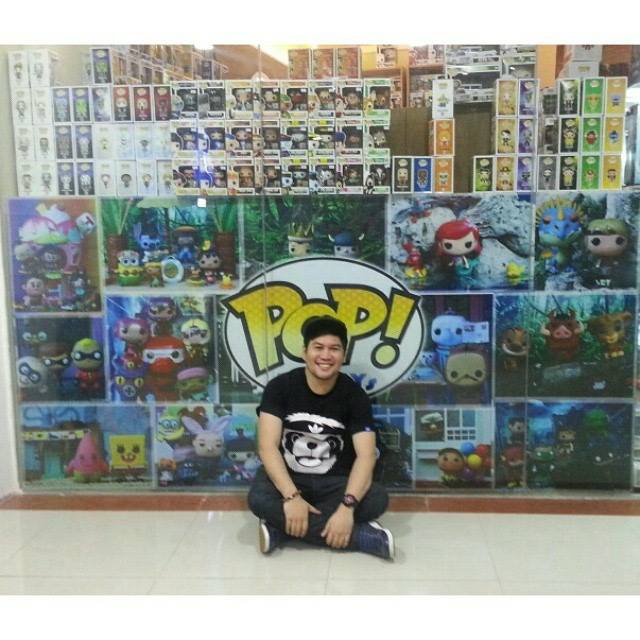 Matt Dalisay is certainly no stranger to pop culture and entertainment. He serves as head of sales for Nickelodeon in the Philippines. He gained the notice of POP collectors worldwide when he started collecting Funko products and photographing them. So much so that Funko invited him to contribute to the upcoming World Of Pop, Vol. 5. PPG was able to catch up to Matt and interview him.

PPG: Is World Of POP Vol. 5 your first time to work with Funko or have you been in previous volumes?

Matt: Yes, it’s my first time. I was surprised when I received an email confirming that they wanted me to take pictures of upcoming POPs. I submitted several photographs and they selected from those. Each photographer was assigned different themes.

PPG: You’ve said that you don’t consider yourself a photographer. Your pictures have been out on social media for a while now.  Did you ever dabble in photography before toys?

Matt: I don’t really know anything about the technical aspects of photography. Stuff like different lenses, ISOs, etc. I bought a DSLR back in 2006 for a trip to Europe. A friend asked me to photograph some toys and that’s how it’s started. Toy photography became a stress reliever for me. I showed my photos to clients and they were impressed saying that I had a great eye for it. But I’d still want to take proper photography lessons when time allows.

PPG: How about education? Did you have an arts background?

Matt: Actually, my degree is in Communications.

PPG: Are your dioramas always a key part of your photos? Setting up the toy with other items? Do you do this across toy lines or only for POPs?

Matt: I want to recreate scenes from the movie or story that the toy is associated with. I usually brainstorm every day for fresh ideas on how to execute the next picture. Before Funko, I collected McFarlane and NECA. I’m obsessed with Chucky from Child’s Play! I also collect Hot Toys and Disney.

PPG: How do you feel about all the acclaim your pictures are getting?

Matt: Happy, of course. Honestly, I’m negatively affected when I put a lot of effort into a particular picture and I don’t get a lot of good feedback from it. I actually stopped posting on Facebook for a while when I thought that people were fed up with my stuff. I gained some confidence again when I started on Instagram.

PPG:  What’s the key to finding just the right items for a diorama you want to set up? On the average, how long does it take you to find the right “props”?

Matt: It’s really about visualizing the scene as a whole. You have to know the characters and then try to tell a story with the picture you’re setting up.

PPG: Right, but let’s say you have the concept down. Is it a matter of finding the right items in the inventory? Or actually going out and getting the items to match your concept?

Matt: I have a lot of play sets that I can work with.  But yes, I have to make it work with that inventory.  An example is the Harpy from Game Of Thrones. I only needed a single piece from a castle play set I have to complete the picture.

PPG: Is Funko dominating your current collecting habits at the moment? Have you photographed some of their other lines?

Matt: Yes it is! They just keep on releasing all these new lines. I used to crisscross Metro Manila just visiting all the different shops to get my Funko fix. And yes, I’ve photographed the Vinyl Vixen line, Dorbz, Mystery Minis and the new Rock Candy line.

PPG: You think you could design one of these as well as you photograph? Or do you already have ideas for Funko? Maybe some killer product idea for your own toy line?

Matt: I don’t think I have the talent for designing toys. I can offer suggestions. I think I can tell if a toy will do well in the market.

PPG: Tell me a little about your collection, I know you’re into Disney and DC. How many Funko products do you own roughly? And what are some of your favorites?

Matt: Basically, I collect everything! Disney, DC, Marvel, Movies, etc. I stopped counting when I reached the 1000 mark last October. My house is a huge mess! I really need a display case. It’s a little tough since I’m renting the place but at least I don’t bother anyone else because I live alone. My favorites include Hot Topic Guy, Martian Freddy, The Mayor, and the custom Matt POP given to me by Jun Go and Crown Customs.

PPG: Are you currently working on anything for Funko?

Matt: Not at the moment. Am just excited about the release of Vol. 5  and I can’t wait to get my copy. I’m very proud to represent the Funko community in the Philippines.

PPG: No invite to go up to Funko headquarters?

Matt: No, but I’d really want to visit. I want to meet the people behind Funko. It would be a dream come true.